One more on its way? 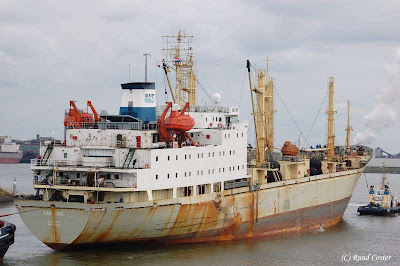 In this long-running drama, the latest from TASS is that the Makarov has begun the operation to lead the what it calls the "trawler" Bereg Nadezhdy out of the ice trap in the Sea of Okhotsk. The Makarov reached the Bereg Nadezhdy at midnight Moscow time last night and, after completing the preparations, at 02:00hrs began the operation to lead the ship out of the heavy ice zone.

Why TASS should refer to the Bereg Nadezhdy as a "trawler" is something of a puzzle. She is a 13,000-ton Kristall II type fish carrier ("Komsomolets Primorya" type), one of 27 units of the type built from 1983 to 1993. Their function is to receive frozen fish from fishing vessels at sea and transport it to port. They can also act as "mother ships", supplying fishing vessels with fuel, water and provisions. (The ship pictured is an example of the type, the San Luis, formerly the Kildinsky Proliv, built in Wismar, Germany 1989.)

With a beam of 22 metres, the Bereg Nadezhdy should not prove too much of a problem for the Makarov with its beam of 25.97 metres. The real challenge will come when they try to extract the Sodruzhestvo, with her 28 metre beam. It is now anticipated that the Krasin, when she arrives late tonight, will work in concert with the Makarov to make the ice channel wider in the hope the Sodruzhestvo can be squeezed through. 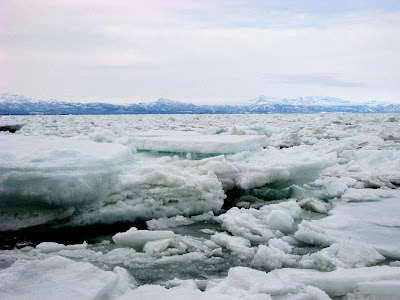 Whether this works is anyone's guess, as so much will depend on the ice thickness and conformation, the temperature and the wind strength. There have been reports of depths up to six metres, is what is reported to be heavily hummocked and layered ice.

The picture above is from the Okhotsk sea – an earlier season – which illustrates what the conditions could be like. In addition, it could well be dark, with zero visibility in blizzard conditions. Even a fair-weather tow of the Sodruzhestvo would be an extraordinarily difficult undertaking, so the famed Russian expertise in ice navigation is soon to be put to its ultimate test.