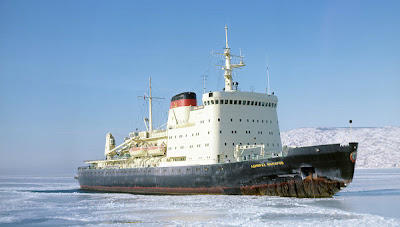 ... and two to go in the continuing Okhotska Sea crisis - the biggies. On this day, the Russian Orthodox Christmas Day, the Makarov (above) has rescued the Professor Kizevetter and passed her through to the Magadan which is escorting her to a safe area. Now for the Sodruzhestvo and the 13,000-ton fish carrier, Bereg Nadezhdy, probably in reverse order.

Meanwhile, the Krasin is still on its way, now expected late on 8 January (tomorrow) – earlier than first reported. She really must be piling on the coal. She must then penetrate the ice shelf – from the reports, the best I can gather is that the trapped ships are about 20 miles in, although that will vary as the shelf itself – particularly in this region – is highly mobile.

We also got confirmation from a very badly translated piece of the fate of the trawler Nimbus. It is indeed stuck in the Barents Sea (or was), with the rescue tug Murmanryba coming to its aid.

The Barents Sea is, of course, another "poster child" for the warmists, who fret constantly about the ebb and flow of the ice there. Clearly, it is more flow than ebb at the moment, if experienced trawler captains are getting stuck (and they have to be experienced to be allowed up there, some of the most dangerous waters in the world).

UPDATE: What has been described as a Russian fishing trawler, with at least 11 crew on board, is reported sunk in stormy waters west of the island of Sakhalin, according to the Interfax agency. Two Russian transport boats and an An-74 aircraft were searching for missing crew members, amid "unusually fierce storms that have seen gusts of up to 65 mph". Hopes of finding any survivors are remote due to the stormy conditions and low temperatures.

Another report suggests that this is a Cambodian-flagged ship, the Partnyor, with about a dozen Russians on board. "The ship is sinking," the Partnyor said in an SOS message read on television by a federal fisheries agency spokesman, Alexander Savelyev. "The only life raft opens with difficulty, the wrong way." The ship was about 6 nautical miles from Sakhalin Island's southwest coast when it sent the distress signal. 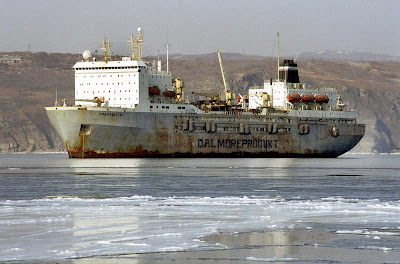 Back in the Okhotsk Sea, the Admiral Makarov is said to be less than 15 miles from the 13,000-ton fish carrier Bereg Nadezhdy, with rescue operations being hampered by poor weather conditions. The trapped ships are estimated to be some 24 miles into the ice pack, which suggests that there has not been any great progress.

The deputy head of Federal Fisheries Agency, Alexander Saveliyev, is nevertheless saying that all the ships will be freed by the end of the New Year holidays, which run through Monday. "It will only be possible to pull the Bereg Nadezhdy out by dinner time on Saturday," he says, "and the Sodruzhestvo fishery mother ship by the end of the (Russian) New Year holidays."

The Transportation Ministry says that the Sodruzhestvo (pictured above) would be the most difficult to free because it was wider than the icebreaker. This indeed, has been the problem all along, as to how an icebreaker can extract such a large ship.

The incidents, are of course, triggering episodes of award-winning journalism, this example from The Times via Sify. And Mr Murdoch wants us to pay for this?