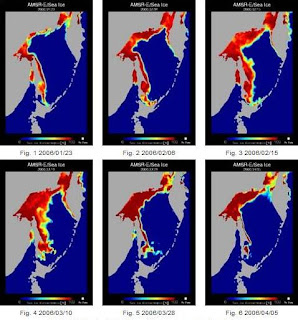 With Russian ships still trapped in the Sea of Okhotsk, in ice of two-metre thickness, Republican American blogger Steve Macoy recalls a 2006 symposium on global warming.

Illustrated were findings that that a large warming area existed in the western part of the Sea of Okhotsk, and a warming trend widely extended toward the western North Pacific. It was thus "widely believed" that the global warming was recently proceeding and the East Siberia region just north of the Sea of Okhotsk was one of the most sensitive areas to the global warming in the Northern Hemisphere.

The Sea of Okhotsk turns out to be quite an important area from the warmist perspective, this paper reporting that it plays a role as the pump of the North Pacific – thus having a significant effect on the climate of the region. It forms a significant ice factory for the whole region and there are said to be "clear indications of global warming" around the sea.

This report in 2006 claimed a dramatic shrinkage of ice (illustrated), and a shortening ice season – with dire economic consequences. And it was this paper which reported on the area of the sea being "a sensitive area to the current global warming", despite cyclical effects being reported elsewhere.

With the region now experiencing thick – and evidently unexpected – ice, this is clearly of more importance than just the trapping of a number of ships. The ice in the whole region is something of a warmist poster child, and another one that has suddenly lost its appeal.

As the reducing ice extent has been used as evidence of global warming, so can we assume that the rapid increase in ice may be an early sign that the warming is over?