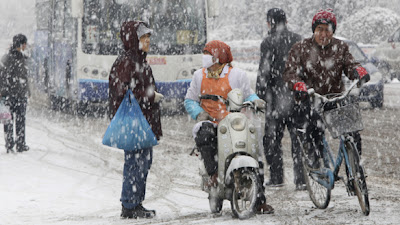 As Joe Bastardi forecasts that the "Emperor of the North" is getting ready to march south in the United States, it seems as if the Chinese have beaten him to it.

Widely reported, not least by Xinhuanet, freezing temperatures, sleet and snow in southern China have disrupted lives of over 3.83 million. The weather has forced 58,000 people from their homes and caused about $200 million in economic losses, with the collapse of the roofs of more than 1,200 homes across the southern regions of Jiangxi, Hunan, Chongqing, Sichuan and Guizhou.

Freezing weather has also damaged more than 300,000 acres of crops, including cabbage and rice. In Guizhou province, 22,800 people were forced out of their homes, and drivers abandoned thousands of cars after ice-covered roads were closed. People, especially those living in the mountains and the elderly, are still being evacuated from their homes.

The National Meteorological Center (NMC) says that the freezing weather is likely to continue for at least another week, although a repeat of the 2008 conditions is thought unlikely. Nevertheless, this is another nail in the coffin (unfortunately, only metaphorically) for the egregious Met Office chief scientist Julia Slingo who so desperately wants us to believe that the cold weather, which we experienced in Europe, was "not a global event."

Slingo is, of course, relying on unseasonably warm weather in southern Greenland, and eastern Canada, but even there she may be in for a shock as conditions there deteriorate rapidly.

But as Slingo bleats, and the warmists insist that this year was the warmest since records began, or the second warmest, or whatever, Professor Werner Kirstein of the Institute for Geography at the University of Leipzig cautions against placing too much emphasis on the decade of 2001 -2010.

The claim that it is the hottest on record, he believes, is "a joke". He ends up saying that determining a global average is a tricky business and in the end is only "a theoretical value". The one thing that is not "theoretical", though, is the repeated appearance of these outcrops of "global warming" that Slingo insists are just local events.