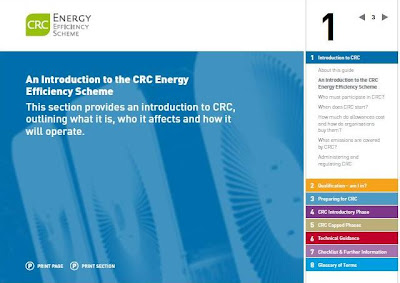 Amid the torrent of "climate change" news, we missed this one, the government's very own "cap and trade" scam, disarmingly labelled the CRC Energy Efficiency Scheme – formerly the Carbon Reduction Commitment.

This is the child of the Climate Change Act 2008 (approved by parliament in October of that year, while it was snowing outside), a new "carbon tax" which takes effect this April. As the official guide helpfully explains:

CRC will affect large organisations in both the public and private sector. Organisations that meet the qualification criteria, which are based on how much electricity they were supplied in 2008, will be obliged to participate in CRC.

Participating organisations will have to monitor their emissions and purchase allowances, initially sold by Government, for each tonne of CO2 they emit. The more CO2 an organisation emits, the more allowances it has to purchase.

Initially, about 5,000 organisations will be caught in the net – including many of our major national retailers who between them account for many thousands of premises. The threshold is electricity usage of 6,000 MWh/year, with those users required to buy their allowances at an introductory price of £12 per ton of carbon dioxide emitted. They are then required to buy credits on the carbon market if they exceed their quota.

A singular feature of this system is that it does not cover those businesses and operations already covered by the EU's emission trading scheme, so these are additional to the current system.

Also included in the net are government-funded organisations such as local authorities, schools, hospitals and universities, which are already under financial pressure and which will now be subject to this bizarre system where the government gives with one hand and takes away with the other.

In what must also be the height of perversity, even central government departments fall into the net, so it would appear that the cash-strapped Ministry of Defence is going to have to divert funds from its front-line operations in Afghanistan to feed the ravenous carbon machine.

Needless to say, there is a massive bureaucracy involved in administering the scheme and, to add insult to injury, there is a registration fee of £950 for all "participants", plus an annual subsistence fee of £1,290 for administration.

Autonomous Mind has a good look at the scheme and concludes, as do we, that it confirms that it is money and not "saving the planet" which is driving the government's obsession with climate change.

What is surprising – although perhaps not, considering that we failed to register it – is that this has almost completely slipped under the radar and has remained unnoticed by the MSM in general - although not by the BBC.

From that, though, you would hardly realise there was a problem but, when the media discover that patients are being turned away from hospitals, school places are restricted and RAF aircraft are being kept on the ground, as funds are diverted to pay the carbon tax, perhaps sentiment will change.

As for business, this is another "own goal" on the part of the government, driving enterprises off-shore and adding to the growing ranks of the unemployed. Some, though, will doubtless become CRC administrators, so at least we get some more "green jobs" to keep Mr Cameron happy.