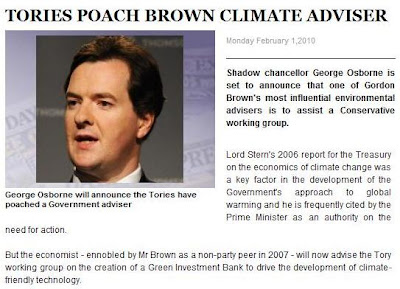 Lord Stern as a Tory advisor? There can be no other explanation – the Tories want to lose the next election. We will be happy to assist them in that endeavour, although from the look of it, they need very little help.

It is also covered in The Daily Telegraph - absolutely unbelievable ... just as the whole global warming scam is falling apart, the Tories re-affirm their commitment to it. You could not have better evidence that the hierarchy is completely out of touch with events.

At least in the United States, the Republicans (some of them) are beginning to stir, beginning to recognise that climate change is a major political issue - although the US media have yet to rise from their slumber. But here, with the media increasingly hostile to the scam, the Cameron tendency is living in a world of its own. I do not think I can every recall a time when the "disconnect" has been greater.

A political party has been reborn: ABC - Anyone But Cameron. You can't say "Conservative". By no stretch of the imagination is Cameron a Conservative.