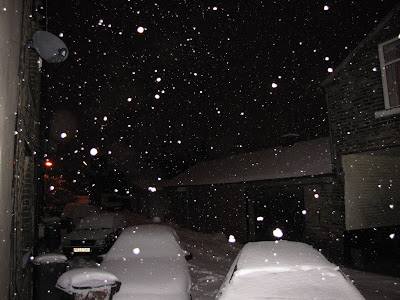 It is global warming here again, and it is getting serious. It is not so much the depth, as the repeated falls. Each layer compacts and freezes which, with fresh global warming on top becomes lethally slippery.

Local authorities, however, are cutting back on gritting and many will run out of salt completely within a week – with very little chance of immediate replenishment.

It says a great deal for us as a country, and our catastrophically incompetent government that they cannot even keep the roads clear. Refuse collection has been suspended and we have not had our bins emptied since before Christmas. Civil society is gradually seizing up.

The warmists are still out in force though, defending their sacred religion and the nation treats them for what they are – a laughing stock. The latest to crack is Giles Coren in The Times. "Climate change doesn't mean we’ll have lots of lovely weather all the time, you numbskulls!" he storms, telling us he is sick of all the global warming jokes.

Gerald Warner, however, is not convinced. The new "deniers", he says, are the warmists. Me, I've had enough of them, and much else besides. The only consolation is that we don't really need to make up any jokes. We've got one for a government. But then, we could always live in Ireland. The incompetence of the ruling elites, it seems, is endemic.