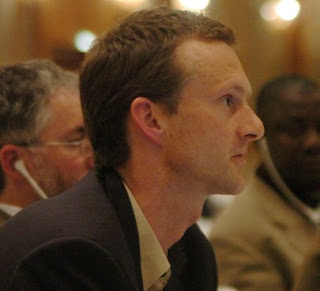 A British government department, DEFRA, has paid taxpayers' money to a British University which in turn paid it to the British subsidiary of an Indian research organisation, which in turn seems to have paid it to a New Zealand university scientist so that he could work for an international organisation based in Geneva – the IPCC.

Welcome to the bizarre world of climate change politics, where nothing is what it seems and governments indulge in behaviour which, in other circumstances, would look very much like money laundering. But, bizarre though it might appear, this is only half the story. The reality is even more convoluted - the word "bizarre" doesn't even begin to describe it.

The tale emerges from our trail of the millions salted away by climate change "hero" Rajendra Pachauri, and the role of TERI Europe, his outpost of Empire in London.

When we were first alerted to this payment from DEFRA of £30,417 by one of our forum members at the beginning of the month, we found it had been paid to Cambridge University, "to provide funding to TERI Europe to cover salary and travel cost of the head of unit responsible to produce a Synthesis Report of the IPCC AR4."

Given that the only link (we thought) between TERI and the IPCC was Dr R K Pachauri, we naturally assumed that the money was intended for the good doctor. We were wrong. That he was paid this money is denied by the Department of Energy and Climate Change (DECC) – which has taken over some duties from DEFRA.

The press office at DECC, however, has been unable (so far) to tell us to whom the money was paid. That information came from none other than Mrs Robins, aka Ritu Kumar, director and company secretary of TERI Europe. In response to our questions, she informs us that the money went to Dr Andrew Reisinger (pictured), whom she tells us, is currently a senior fellow at the New Zealand Climate Change Research Institute.

Andy, as he likes to be known, is a figure of some importance in the "climate community". As head of the Technical Support Unit for the synthesis report group of the IPCC, he was responsible to his "core group" co-author Rajendra Pachauri for co-ordinating the drafting of the "synthesis report" to the IPCC's Fourth Assessment Report (AR4).

The importance of this synthesis report cannot be overstated. Approved in detail at the IPCC plenary in Valencia, Spain, during 12-17 November 2007, it represents the formally agreed statement of the IPCC concerning key findings and uncertainties in AR4. It is the substantive document, on which governments rely for the subsequent climate negotiations.

Thus, Reisinger is in an important and powerful position, which makes his background crucially important, if he is to be seen as independent and impartial. This would seem to be the case if he works for the New Zealand Climate Change Research Institute, which is a department of the University of Wellington.

Certainly his cv starts well enough, and seems to confirm this. By way of background, he studied atmospheric sciences in Germany and New Zealand, specialising in measurements and modelling of ozone depletion, urban air pollution and agricultural greenhouse gas emissions.

He then spent six years working for the [New Zealand] Ministry for the Environment as Senior Adviser on climate change, acting as science liaison point, developed a work programme on climate change impacts and adaptation options, and contributing to climate policy development. In 2002, he also represented the NZ government on the IPCC and participated in negotiations under the UNFCCC and Kyoto Protocol.

But then, he tells us, he worked "for the IPCC in the UK and in India," where he coordinated the production of the Synthesis Report. That gets very interesting as we follow Dr Reisinger's career path during that period, covering 2006-7.

We first come across him in 2006, when he assumes the designation "Met Office, UK." He then attends the climate change summit in Bali in December 2007. There we find him designated as "IPCC SYR", the "SYR" standing for "synthesis report". But the e-mail is the give-away - the address is "@teri.res.in", which belongs to Pachauri's own organisation, The Energy and Resources Institute (TERI), in India.

But, if there is any doubt as to where Reisinger belongs, the IPCC itself solves the mystery, giving him the designation: "IPCC SYR TSU, Met Office Hadley Centre, UK, and The Energy and Resources Institute (TERI), India."

So, it would appear that one of the most powerful and influential men in the IPCC process, second only to Rajendra Pachauri, actually works directly for TERI India, which – like its master – has benefitted and stands further to benefit from climate alarmism.

Furthermore, this man also works close enough to the Hadley Centre - part of the UK Met Office - to be able to describe himself as working for it, this proving a link between TERI, Pachauri and the Met Office.

As for the money, DEFRA is the primary funder of the Hadley Centre, for which Reisinger claimed to work. If it wanted to pay him, could it not have remitted funds directly to that organisation? Equally, the UK contributes to the IPCC. Since Reisinger was working for the IPCC, could it not have sent money there, for him to be paid by the institution that was nominally employing him?

Instead – as we have seen – it pays Cambridge University, which pays TERI Europe. The destination of those funds, one can only assume, is TERI India. And this is hardly an unwarranted assumption. In the Synthesis Report, "gratitude" is expressed "particularly to the staff of the Technical Support Unit for the IPCC Synthesis Report in The Energy and Resources Institute (TERI) in Delhi."

But if DEFRA is funding this unit, why not say so? And why the convoluted route for the payment? This is not the way government departments normally work - unless, of course, they have something to hide.

Interestingly, Reisinger is a man who has some firm views on climate science. "We should not judge whether the answers are good by whether they are convenient, or even whether they make intuitive sense; we should only rely on them if the process by which they were reached follows general, well-accepted principles of quality assurance."

By this, Reisinger means the setting up of expert panels whose reports "undergo an open, multiple peer-review process and that are connected with the highest quality international research," something he says in May 2009, eighteen months after the synthesis report had been delivered.

Representing the distillation of the combined output of the scientific working groups whose labour fills the pages of the main AR4 report, he would, no doubt, consider "quality assurance" for his own report absolutely vital.

Presumably – although not stated – the expert panels should be made up of scientists of high-standing who should – above all else – be absolutely impartial, their judgements entirely unclouded by commercial considerations and possible conflicts of interest.

If that is indeed a test, however, Reisinger fails it.

PACHAURI THREAD
Posted by Richard at 16:58