A monument to folly 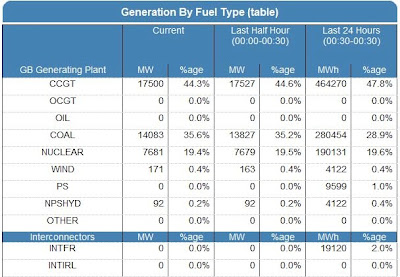 This time last year we were remarking on a not uncommon phenomenon in the UK – an almost total lack of wind. And here we are again, with the temperatures struggling to get above freezing and we have, effectively, a zero wind state - see below right.

The effect of this on the electricity generation system is evident from the latest status report (see above) which shows a predominant reliance on gas, which accounted for nearly half of total production in the last 24 hours, followed by coal at nearly thirty percent and nuclear at just under twenty percent.

Wind, in all its glory, managed to deliver a risible 0.4 percent – which is hardly even a rounding error and amounts to an insignificant contribution to the national electricity supply. Producing a mere 163 MW at around midnight last night, against an installed capacity of just over 4 GW, that represents a load factor of four percent.

What price, therefore, The Guardian prattling away in June last that "Offshore wind farms could meet a quarter of the UK's electricity needs" – a claim made by this fatuous government of ours.

Thus we have this week that utter fool Gordon Brown, masquerading as our prime minister, announcing this week the launch of a "£100 billion green power revolution" with the awards of a raft of development contracts to build a new generation of offshore wind farms.

Sustainable only with a massive subsidy, extracted from the electricity bills of unwitting users via the Renewables Obligation, these monuments to folly can no more deliver the goods when needed than can Mr Brown – a fitting monument to his obsession with (non-existent) global warming.

Needless to say, the obsession is shared by the wannabe prime minister David Cameron so, if these ridiculous fabrications are ever built, it will be on his watch that they are built, the first batch not due to come into production until 2015 - if then.

With a theoretical capacity of 35 GW – but an actual load factor a third of that – this puts the construction cost at about ten times that of nuclear. And then there is the cost of the back-up generation.

There can be no greater monument to the folly of our current batch of leaders who are prepared to countenance this absurdly expensive and unreliable scheme, saddling us with massive costs which we can ill-afford to pay. There should be a special place in Hell for these people.