The waste we are funding 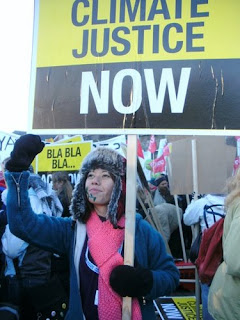 John Page over on Purple Scorpion puts the "TERI affair" superbly into context - with WFW picking up the theme as well - noting the sort of crass waste of money recorded here is part of our foreign aid budget, which David Cameron wants to protect.

One should note from this scandalous announcement the insidious role of the British Council. It seems to have become the international cheer-leader for the global warming religion – at the taxpayers' expense – so much so that it dedicates a specific website to the worship of its new gods.

Just how much this institution has deteriorated is illustrated by its choice of personnel. Readers will recall the infamous Dr Viner of the Climatic Research Unit who in 2001 was telling The Independent that within a few years winter snowfall would become "a very rare and exciting event".

Still being eulogised by the BBC a couple of years ago, he has now found a new niche as head of the British Council's climate change programme, with the Orwellian task of indoctrinating "younger generations" in 60 countries with the mantras of the warmist creed.

The amount of money that is being frittered away on these fatuous – if dangerous – programmes is quite staggering. And it is not the first time that TERI has been the beneficiary.

In May last, DFID officials in India were were subjected to a two-day "exposure programme on climate change" organised by TERI, which "sensitized the participants with latest developments on various issues related to climate change with a focus on science, mitigation, adaptation and policy aspects." 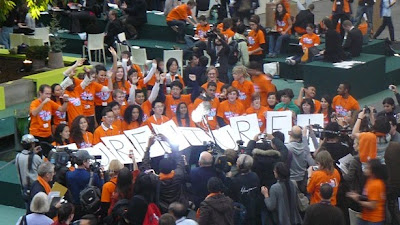 This is part of an international effort which has the taxpayer funding German teenagers (pictured top left) to wave "climate justice" banners outside the Bella Centre in Copenhagen, with more teenage activists inside (above) - the British Council all while keeping up its flow of propaganda on its blog, offering us such delights as: "Dr Pachauri has been phenomenal in his role at IPCC and the fourth assessment report of IPCC is the basis for all scientific information on climate change."

Is this really what we pay our taxes for?

Now, with £10 million more of hard-pressed British taxpayers' money about to flow into the coffers of an organisation owned by a multi-millionaire businessman by the name of Dr R K Pachauri, it would be highly germane to question whether David Cameron has all his marbles in place, wanting to protect this funding stream.

PACHAURI THREAD
Posted by Richard at 12:41