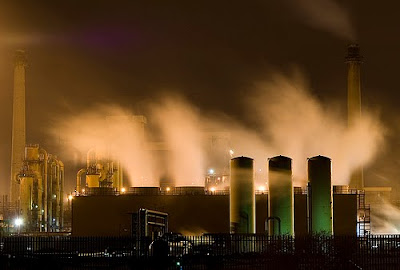 The EU's emission trading scheme (ETS) may have been the deciding factor in the closure of the Corus Redcar steel-making plant – reported last week , giving the company a windfall bonus of up to £1.2 billion from the plant closure – on top of other savings.

Earlier this year, Corus – part of the Tata Group Europe - disclosed that its UK steel inventory was "close to exhaustion" and analysts are expecting improved earnings from second-half trading as production is increased to meet a rebound in demand.

Mothballing the efficient Redcar plant (with no expectations of its re-opening) thus fails to make obvious commercial sense, especially as Tata bought the plant only in 2007 as part of its strategy to give it better access to European (including UK markets).

However, revealed by The Times today (although the information has been available since June is an illustration of how valuable an alternative product - "carbon allowances" is to the group.

The paper's story focuses on the rival ArcelorMittal group, pointing out that it has accumulated 20.8 million surplus allowances (EUAs) given to it free by the EU. With the carbon price at over £13, they are worth about £270 million. But, with additional surplus allowances up to 2012 and an increased carbon price – expected to rise to £30 - the company could have gained assets worth around £1 billion.

While this applies to ArcelorMittal, of the three big benefactors of the scheme, the second is Corus. It has accumulated a surplus 7.5 of million EUAs (The German ThyssenKrupp steel group is third with 5.6 million). For Corus, the current value of its windfall is £100 million and, with an increased carbon price and its additional allowances, the asset value of its holdings could amount to £400 million.

To make up for accumulated and expected losses, though, the company says it is has identified £600 million "in savings and cash benefits" from its UK operation through to next March.

With redundancy and decommissions costs, very little of that can actually come from the process of closing down the Redcar plant. But, with a capacity of 3,000,000 tons of steel, closure of the plant will deliver further "savings" over 6 million tons of carbon dioxide, worth an additional £80 million per annum at current rates but around £200 million at expected market levels.

This, even for a company the size of Tara steel, is a considerable windfall, over and above the money it will already make from the EU scheme. But, with a little manipulation, the company can still double its money. By "offshoring" production to India and bringing emissions down – from over twice the EU level - to the level currently produced by the Redcar plant, it stands to make another £200 million per annum from the UN's Clean Development Mechanism.

Thus we see Indian plants being paid up to £30 a ton for each ton of carbon dixoide "saved" by building new plant, while the company which owns them also gets gets paid £30 for each ton of carbon dioxide not produced in its Redcar plant. That gives it an estimated £400 million a year from the closure of the Redcar plant up to 2012 – potentially up to £1.2 billion. And that is over and above benefitting from cheaper production costs on the sub-continent.

The decision to close Redcar – alone of the European plants to go - must also have been influenced by other factors. For instance, as well as the €20 million EU and government grant to its Dutch operation, the company points out that, in the Netherlands, "it has started to benefit from a government short-time work scheme under which a proportion of employees' salaries is paid by the state in return for in-house training during those periods in which they have no work."

No such similar scheme exists in the UK which would have further weighted the balance against Redcar. Add the £1.2 billion windfall and the company could hardly have made any other choice. The ultimate irony, of course, is that the net "carbon" saving is nil.

Nevertheless, all is not lost. In May last year, the local paper was parading the "green" credentials of the plant. The company's 3,000-acre site at Redcar, it said, was "also home to wild flowers and wildlife and the land borders a site of special scientific interest."

It looks as if Redcar is about to gain a whole lot more wild flowers and wildlife.