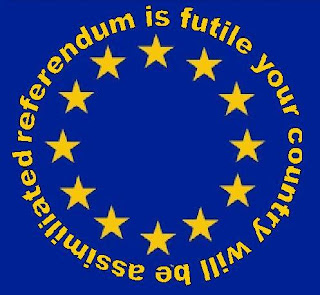 "As long as he [David Cameron] is at the helm of the Conservative Party, there is no hope whatsoever of achieving any progress in the battle against Brussels."

That is what I wrote on 8 June 2006 but I knew it already. The test came on 7 December 2005 when, at the first available opportunity, the newly appointed Tory leader ditched the carefully crafted policy on repatriating the Common Fisheries Policy.

If we had any lingering doubts, from that time on we had none. "Call me Dave" was not, has never been and will never be a eurosceptic. He follows in that long line of faux eurosceptic Tory leaders, who will talk the talk in an attempt at keeping the troops on side, but will never walk the walk.

At that time in December, little Dave did not even have the guts to admit that he had ditched the policy. He simply reshuffled its creator, Owen Paterson, and nothing was said about it at the time. It took six months before there was any official confirmation. That came on 10 June 2006, which we announced in a post entitled "Never trust a Tory".

We were right then, and right now. Not much more can be said about Dave's surrender to the EU, although it isn't really a surrender. What he did yesterday was his direction of travel all along. That the "colleagues" are beside themselves with joy tells its own story. The Boy has done good by them.

He need not have any worries. Dave has no intention of securing anything meaningful. His is indeed a "do-nothing" policy, calculated to give the impression of purposeful activity, while achieving precisely nothing of consequence. Mary Ellen Synon on her blog thus compares Cameron with the Vichy leader, calling him "Dave Pétain".

Somewhere in the French archives, she writes, there is a 1942 poster of the Nazi collaborationist Pétain gesturing out to the people of France and saying: "Francais!, vous n'etes ni vendus ni trahis ni abandonnés. Venez a moi avec confiance" - "Frenchmen! You have not been sold, betrayed or abandoned. Come to me with confidence."

That, of course, is Dave's cry, one that has the Tory Boys (of both sexes) calling in his wake: "We have to get rid of Gordon Brown first ... 'Europe' can wait until we've done that deed." That, of course, means some time never, which is not good enough – nowhere near good enough.

The deal stays: "no referendum, no vote". Dave doesn't want my vote, or the votes of the million-plus who share my views. Well Dave, we don't want you either, so I guess we understand each other.