He doth squirm too much 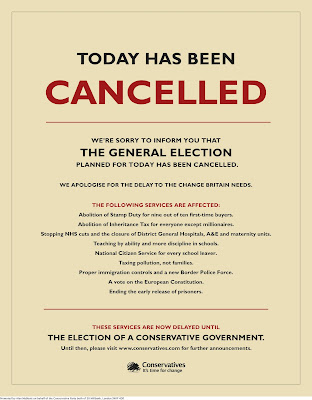 Note the penultimate item ... no mention of ratification there (click the pic to enlarge). And then there was the speech by Dave on 26 May 2009, under the title: "Fixing Broken Politics".

Once again, there is no mention of the referendum being conditional on the treaty not being ratified. Methinks little Tim Montgomerie doth squirm too much.

The fact is that Dave promised a referendum ... not once, but several times. There was no mention of that being conditional on the treaty not being ratified.

And those sages who bleat that a referendum would be closing the door after the horse has bolted are missing the point. Politics is as much about symbolism as it is practicalities. The "folk" memory is that Dave promised a referendum. The Sun readers didn't look at the small print. Now, "Tory Toff Dave" will be seen as just another slimy politician who doesn't keep his word - which is exactly what he is.

The point here is that, even if the merits of a referendum are entirely symbolic, that does not make them unimportant. Apart from lodging Dave in the public mind as a man who kept his word, a strong "no" result would strengthen his hand with the "colleagues" who would find it harder to reject an IGC when there was a referendum "mandate".

A mere manifesto commitment, buried in the welter of general election promises – which seems to be the new offer - does not have the same strength. This will undoubtedly cost Dave votes, although he thinks he can do without us. That is the bottom line, but – of course – we will not leave it there.