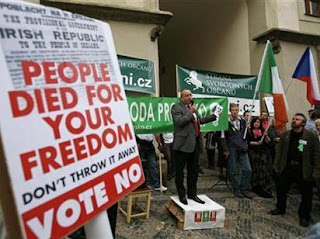 There is a very large measure of comfort in prospect of a "yes" vote in the Irish referendum. For, if as widely predicted - although by no means in the bag - the Europhiles prevail and the vote clears the way for the full ratification of the constitutional Lisbon treaty, today, 2 October, will go down in history as the day the EU started to unravel.

To understand why this might be the case, one has to delve into the deeper recesses of the "project", way down into the engine room. There, one will discover, as I did an obscure animal, known as the "dual international quasi-legislation/comitology mechanism". In this creature, which is far more common than most would even begin to imagine, lies the reason why the EU has been successful.

And, if the EU had stuck to their "diqules", as they have come to be known, it would have lasted forever. But hubris has intervened in the form of the constitutional Lisbon treaty, and that will be its downfall, its nemesis. Let me explain - for the secret of the current success of the EU lies in six reasons.

Firstly, at the heart of modern government (in fact central to all levels of government, local to international) is a terrible secret. Government is boring. In fact, it is more than boring. It is mind-numbingly, crashingly tedious - the sort of tedium that, if it was instituted as a form of torture would even be banned by the Peoples' Republic of China as inhumane.

Secondly, most government is invisible. What you see on the television and read in the newspapers is only the tiniest fraction of what actually goes on. We get to know about less than one percent of one percent, and the politicians even less. And so boring is it that we don't even want to know.

Thirdly, most politicians have no aptitude for government and few even understand how it works. They are, therefore, in the main, entirely content to let their officials run the nuts and bolts, while they act as front men for the system, going on the jollies and working the media.

Fourth, the European Union has become part of a nexus of legislative bodies, linking international agencies of the United Nations with regional, national and local bodies, to form one continuous, seam-free administrative machine. So embedded is it in the administrative fabric of this and other nations, that the national systems could not function with it.

Fifth, this situation, far from being unwelcome, is highly convenient to the ruling and administrative classes. It saves them no end of work and relieves them of the obligation of having to pay lip-service to democratic procedures.

Sixth, the system acts as a useful lightning conductor, diverting dissent into the labyrinthine maw of international institutions, where activists can be contained, absorbed and then neutralised (or bought off), leaving national actors untroubled… you can always blame the EU.

Over and above that, the system is now so complex that no one (not even the players) really understand it, so no one will be brave enough to touch it in case they break something they don't know how to fix. And, since it defeats even the players' attempts, the critics do not have a chance. The likes of Eurosceptics can be left to blather uselessly round the edges, their criticism so unfocussed and wide of the mark that it has little effect.

Here, one can take a core objection of the sceptics – that sixty, seventy, or is it eighty percent of our laws are now "made in Brussels". Much of this, of course, is dry technical stuff, like the dimensions of rear view mirrors on busses, the composition of cheeses from various regions, or the level of permitted toxic emissions from crematoria.

Now, while this sort of law may come from "Brussels", it would be more accurate to say that it has a Brussels label. But the bulk are no more EU than they are national laws.

Behind that screen, there are hundreds – possibly thousands - of what are known as "quasi-legislative bodies", working on a global and regional scale. These act under the aegis of obscure organisations such as the OIE, which deals with animal health issues, CODEX alimentarius, created in 1963 by FAO and WHO to develop food standards, guidelines and related texts such as codes of practice, the IPCC which, of course, deals with climate change matters, and the World Health Organisation, which deals with public health and infectious diseases. 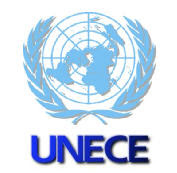 Another of these fascinating organisations is UNECE, the United Nations Economic Commission for Europe – with not 27 countries but 56, including Turkey and Kazakhstan and also, for historical reasons, the United States.

One of its particular functions is to deal with transport, acting via a skein of agreements and conventions, such as the "Agreement Concerning the Adoption of Uniform Conditions of Approval and Reciprocal Recognition of Approval for Motor Vehicle Equipment and Parts, done at Geneva on 20 March 1958", copy here.

It is actually through this Agreement that international standards are worked out for things like the size of rear-view mirrors for busses, which are then handed down to the EU. It then implements them as law in the member states.

The standards themselves are not law, but become law in the EU once implemented, which is done through the comitology system, the twin-track process – through UNECE and the EU – which has acquired that rather cumbersome title of "dual international quasi-legislation/comitology mechanism".

Interestingly, the EU does not get a look in when it comes to formulating these standards, but countries like Norway do. The EU is then used to write the specific legislation for Norway as a member of the EEA. So much for "fax-machine" law. The commission is simply acting as a service provider, making laws for states which have already agreed at a higher international level to implement them.

That digression aside, so useful to the member states are the technical/legislative services provided by the EU – and so necessary are they to the functioning of modern economies – that it is unthinkable that any member state could or would even wish to dispense with them.

Therein lies the genius of the EU. It has harnessed these essential administrative functions to its own ambitions, creating structures and institutions to deal with them in the hope, one day, they will be transformed into something more than a technical organisation. Then, they hope, the EU will be able to assume wider responsibilities in the "high" political areas which include foreign policy and defence. That is what the constitutional Lisbon treaty is all about.

As we observe, so far the Union has been successful. It is still in the game, its ambitions are intact and it is exercising power. But, in the new treaty, it has over-reached itself. It is moving from its "invisible" base to take on board the "high politics" spectrum. But with the additional powers it acquires, it becomes much more intrusive and much more visible. Therein lies its vulnerabilty.

For as long as the "elephant in the room" could be ignored, for as long as it confined itself to the engine room, the political classes have been content to let it continue. They have been able to carry on with their preening and posturing, keeping up the pretence that they were still in change. But, as it becomes ever-more evident who is really in charge, even our most enthusiastic myopics will change their tunes.

With "Lisbon" in the bag, the EU will flex its muscles even more and there will come a point where the number of people it upsets will outnumber those who appreciate its value. The balance of utility will change and the EU will go. Strangely, therefore, getting a "no" vote in Ireland would be the best thing that could have happened to the EU.

But the "colleagues" could never leave well enough alone. If they get their "yes", it will not be the end, or even the beginning of the end. But, as a certain person once said, it will be the end of the beginning. Soon enough, we will see that tipping point in the balance of utility, and from there it will be downhill all the way. For that, if they vote "yes", we will have the Irish to thank.