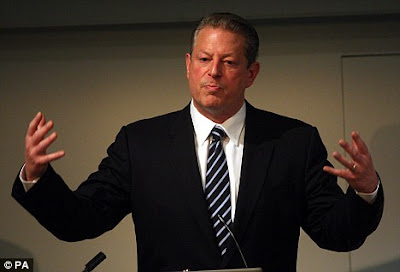 Just as we thought we could get back to (semi-) normal, after a rush of defence stories, up pops, to almost everyone's surprise, a government announcement that it will, after all, have a defence review – but not until after the next election, with a Green Paper to be produced in the autumn.

For all that, the media has been obsessed with the Michael Jackson funeral. The BBC (and others) have been running it wall-to-wall, matched in print by the celebrity-obsessed Telegraph, leaving coverage of the much more important issue extremely sparse.

But if in the real world, we have to consider such ugly things as wars, The Times and The Daily Mail visit the fantasy world of al Gore, who was visiting Oxford (having flown to the UK in his private jet), to invoke the Churchillian spirit in the "battle" against climate change.

Never mind that there are real battles going on – we do not need al Gore's pathetic attempt to turn his failing religion into a crisis. And, to give it its due, it is The Times which affords most space to the real world issue of "defence of the realm", even giving that title to its leader.

Needless to say, the paper rehearses issues which are probably familiar to us all, including the fate of the nuclear deterrent and Trident. Its analysis piece, however – written by Michael Evans - is striking in its depth and perception. He writes:

What is now needed is a ruthless approach to defence. If expenditure is not set to rise, Britain’s Armed Forces can no longer do everything and be everywhere. Investment should focus on the capabilities and platforms which can best be used in the future to contribute significantly to multinational, probably US-led, efforts. Britain does not always have to be the second-biggest troop provider in an international force — as it is in Afghanistan. This country has been punching above its weight for too long.

The leader, as you might imagine, reflects this view, offering the advice that we should stop thinking of ourselves as a global power, able to run a major military effort independently, and think in terms of "collective security" – working with allies. But it also cautions against scaling back commitments in line with changed threats and budgetary constraints.

It wants to keep Britain's independent nuclear deterrent – noting that the economic dividends from scrapping it would be slight, and the damage to Britain's defence capability substantial. Also, the paper asserts, a defence review cannot, be a substitute for a searching examination of how the Treasury is financing the war in Afghanistan. Welsh Guards who are in harm's way today cannot wait till 2010. They must have adequate equipment now, it says.

The Independent and The Guardian seemingly cannot be bothered to report on the government's announcement, in line with the Telegraph which, instead, hands over space to Liam Fox, allowing him to proclaim: "There's a war on - someone tell Labour."

That really is a little bit rich, considering how little input we have had from the Conservatives on the conduct of the war in Afghanistan. But we must suspend judgement, it seems and simply accept that "the next Tory government will carry out a proper review of our defence needs."

At the next election, there will be real choice, claims Fox. We can change to the principled realism of the Conservatives, or continue with the discredited cynicism and failure of Labour. Oddly, he says this will be "a stark choice" but, for defence in particular, a crucial one. He may be right, but not in the way he thinks.

The wooden spoon, however, goes to Sky News with a web report that still cannot distinguish between a Snatch and a Wimik, with defence correspondent Geoff Meade telling us that "30 British lives were lost in Afghanistan and Iraq" in Snatches "because the car was not strong enough to protect troops against small arms fire, petrol bombs and shrapnel." This is a man to whom we do not even need to listen, much less take seriously.

What no-one seem to be watching though is the European dimension. On 6 July, the UK and France released a declaration on defence and security following the UK-French Summit in Evian – which most of us did not even realise was happening.

It covers Afghanistan, piracy off the coast of Somalia, Kosovo, the Middle East Peace Process, DRC and mutual support overseas, with an agreement on procedures to make use of facilities at each other's overseas bases if required.

There was also a British-French cooperation initiative on European carrier group interoperability, launched in London in March 2008. This is now "well on track", and this is to be backed by joint training and sharing of best practice on helicopter operations.

St Malo this is not, but there is still a commitment to the European Security and Defence Policy, which will be strengthened if and when the constitutional Lisbon treaty is ratified. But, while the two countries "recognise the importance of flexible and rapidly deployable forces, including EU Battlegroups and the NATO Response Force," there is no real meat.

The threat is still there, but the delivery is not. The Times has a view on "collective security" and the Europeans have their view. We doubt whether a strategic review will settle the question – the Taleban might have a bigger say in the matter. As for Gore ... not wanted on voyage.