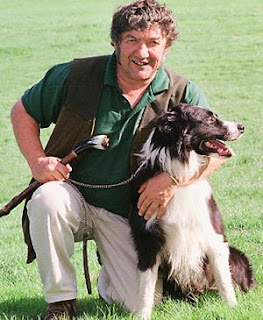 You have to give it to Robin Page – he has a wicked sense of humour. Thus, when he slides the stiletto deep into the heart of UKIP, he does it with style and an easy, jovial quip.

Page has, he writes "just helped the United Kingdom Independence Party (UKIP)." He has jumped ship. "It is a small party," he adds, "whose main wish at the moment seems to be a desire to become even smaller; so I did my bit and resigned."

There then follows a familiar tale of skulduggery, sharp practice and bad faith that has become the hallmark of the UKIP hierarchy, one with which I am personally all too familiar – including the attempts after the event to re-write history to make what happened sound completely different from what actually transpired. In UKIP territory, the "victims" must be responsible for their own fate. The upper echelons of the party can do no wrong (see comment at the end of this).

In fact, Page points the finger at one man, Nigel Farage, who he accuses of having managed "to obtain almost complete centralised power of UKIP". And, having watched the party closely for these past years – having devoted a great deal of my time and energy to its cause – I have no doubt that Page is absolutely right.

From the heady days when we first returned MEPs in the 1999 euro-elections, it looked as though we were on our way to becoming a force in the land. And if there was a single man responsible for that success (although it was the work of many), it was Nigel Farage.

But, before even before what appeared to be the massive breakthrough in 2004, when UKIP returned 12 MEPs with 2.7 million votes representing 16.8 percent of the vote, the rot was already eating away at the heart of the party. Since then, writes Page, Ukip's 12 European parliamentarians have, by defection and expulsion, dropped to nine – and one has even left his constituency to live elsewhere, without telling his constituents. One has been to prison and one is still on police bail, awaiting the outcome of criminal investigations.

At the top of this dunghill is Nigel, a man who has cleaned out of the party anyone who came under the slightest suspicion of being a threat to him. But, having brought the first real success to the party, this is now the man who, almost single-handedly, has destroyed it.

Page might have articulated his disgust publicly, but there are many, many more people who share his views and who have walked away from the party and will have nothing to do with it.

The Tories have been quick to pick up Pages' resignation statement and, no doubt, some are hoping that they will be the beneficiaries of the collapse of UKIP – and that it is. (There is a piece this morning on Tory Diary, which has some interesting, if predictable, comments.)

It is unlikely, however, that the Tories gain any benefit whatsoever. As we pointed out earlier, the inheritors of the UKIP vote – and many more – will almost certainly be the BNP. That seems to be what Labour's private polling is telling it.

We are thus looking a situation where the BNP will for the first time gain a number of MEPs. On the other hand, there is a very real prospect of a total wipe-out for UKIP. It could well lose all its MEPs, including its original three gained in 1999. That, if it happens – and it looks increasingly certain – will effectively mean the end of UKIP and the end of euroscepticism organised on a party basis. For that too, we will have to thank Farage.

But, as we also indicated earlier, that does not mean that euroscepticism will disappear. On the contrary, it will acquire a harder edge, carried along by parallel agendas which the establishment will not like. In the past, they have had great sport from UKIP, mocking and denigrating its members. Now the hard men are going to take over. They will not be mocked so easily – or at all.

Interestingly, on the front page of the Sunday Express yesterday, there was a story on a "MI5 alert" on the expected riots over the summer. That riots are expected is not news – we did it a little while ago. But what is new about the piece is a suggestion that the government is so concerned about the possible break-down of law and order that the Army has been put on standby.

This could very well be true. Recently, from a confidential source, I received information that the MoD was buying up unusually large quantities of tear gas and other riot equipment. Clearly, it has no intention of being caught out, as it was at the beginning of the Troubles, having to ration tear gas and riot shields. Maybe they might even find a use for all those Snatch Land Rovers, when they are returned from Iraq.

The implications of putting the Army on the streets, though, are horrendous. Currently, the Army is riding on the crest of a wave of public approval but, as it did in Northern Ireland, sentiment can very quickly turn. The ramifications for the campaign in Afghanistan might be significant. An Army which is sent out against its own people is not likely to attract much support for its other activities.

But there is not much prospect of the Army disobeying orders. As we saw in the 2001 Foot and Mouth epidemic, it went to work with a will, engaging in illegal activities, intimidating ordinary people and conspiring with the civil authorities to enforce false arrest. It will do so again if ordered, with the back-up this time of the Civil Contingencies Act which makes legal much of what was illegal back in 2001.

However (with the considerable assistance of Nigel Farage), having disposed of the "moderate" voice of protest – which UKIP largely represented – the establishment is going to discover once again a very simple and undeniable truth. There are more of us than there are of them - an awful lot more, and they haven't ordered anything like enough tear gas.

They had their chance to listen to the voices of moderation – and they blew it. Now, altogether different voices are going to be heard. A Page has turned – in more than one way.