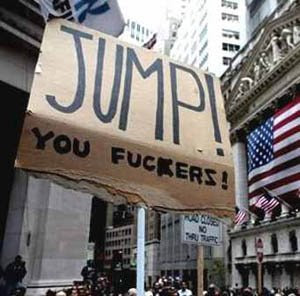 No wonder we are in such trouble. It is more than a week since David Cameron stood in front of his audience in Birmingham and declared that one of the main problems in the financial crisis was "a new international accounting regulation called 'marking to market' [which] automatically downgrades the value of banks."

Now, finally, after ignoring this issue – not even bothering to report the Great Leader's words - The Daily Telegraph wakes up and storms into action with a cross-page leader offering its recipe to solve this huge crisis.

And there, prominent in the text is this:

… changes to accounting rules can lift confidence and alleviate anxiety in the financial markets. The system known as "mark to market" - which records the value of a security to reflect its current market value rather than its book value - can force troubled institutions into insolvency and erodes investor confidence. These rules do not work when there is no market or when it is in such turmoil. The Financial Services Authority should announce that it is prepared to suspend them.

I am not going to use the most appropriate word for these unmitigated fools on this site. But if you go to this post and look at the last word of the second paragraph (don't look if you are easily offended), you will see exactly what I mean.

As we have written on the blog, laboured to the point of desperation, not least here, one week ago, "mark to market" rules are a competence of the European Union.

The particular rules are implemented variously by Directive 2006/49/EC of 14 June 2006 "on the capital adequacy of investment firms and credit institutions", together with Directive 2006/48/EC, augmented by Commission Regulations made under the aegis of Council and European Parliament Regulation (EC) No 1606/2002, implementing IFRS agreed in principle at Basel II, as promulgated by the International Accounting Standards Board.

Therefore, WE CANNOT CHANGE THEM. The Financial Services Authority cannot announce "that it is prepared to suspend them". It has no authority to do so and, furthermore, as we saw yesterday, the EU has decided not to change or suspend them.

If a major and supposedly authoritative newspaper (joke – I know) cannot get its brain round the fact that we have another government calling the shots, and is seemingly completely unaware of the fact that it is advocating something that simply cannot be done, then there is no hope for us. The man with the placard has it right.