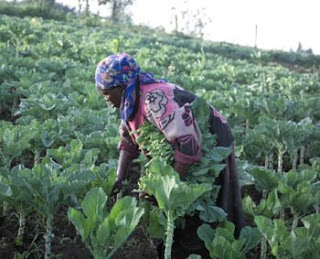 The Financial Times is reporting that the EU "is poised to give €1bn ($1.57bn, £792m) in unused agricultural subsidies to farmers in the developing world to fight food shortages."

This was signalled by Mariann Fischer Boel, the EU agriculture commissioner, in a speech delivered in Brussels yesterday under the title, "Who will feed the World?"

The details are in a draft proposal, seen by the Financial Times and the idea is to set up a fund of €750m this year and €250m next year taken from unused intervention funds, currently surplus to requirements because of high food commodity prices.

This money would then go on buying fertilisers and seeds or other measures to increase production in developing countries, with up to 15 percent being spent on food aid. The money could be given to international organisations, direct to farmers, companies or charities, to governments or to regional projects.

Unfortunately, all the outlines of this plan does is demonstrates with absolute clarity that, like the Bourbons, the commission has "learned nothing and forgotten nothing."

Despite the current global stresses, there is actually no shortage of food. Most commonly, in developing countries, the problem is lack of purchasing power. The food is available but the very poor simply cannot afford to buy it.

Even at the height of the so-called Ethiopian famine – which brought "Live Aid" and that dangerous idiot Bob Geldwarf into prominence - there was never any shortage of food. Simply, the refugees had no money to pay for it.

This lack of purchasing power is especially the case with subsistence farmers, who most often eke out an existence by selling small surpluses in times of plenty, and by selling their labour to larger farmers who have a market for their produce.

An emphasis on production, per se in these circumstances, especially when it is focused on low value commodity crops, is – as we have sought to demonstrate - positively harmful. This creates local surpluses which, without the marketing infrastructures and alternative markets, drive down the prices and leave the poorer worse off.

Those that can, of course, diversify into other crops and it is precisely that mechanism which is driving opium growing in Afghanistan which, in turn, is fuelling the insurgency.

In many other respects, the focus on increased production is also misplaced. In Afghanistan, an estimated 15-25 percent of crops grown are lost through poor storage and pest damage. Producing more under these conditions simply multiplies the loss.

Globally, it is estimated that as much as 52 percent of food production is lost, either in the fields or post-harvest, suggesting that endeavours to reduce such losses would have farm more impact - and more lasting effect – than short-term boosts in production. Yet, we see the EU, on the other hand, bringing in legislation that will massively handicap farmers' efforts to protect their crops.

Other problems include the lack of distribution and the distorting effect of subsidies but the major handicap is the refusal of developed countries to reduce their own farming subsidies and their unwillingness to open their markets to high value produce from undeveloped nations. Add to that the restrictive trade agreements, not least the US Bumpers Amendment and you have – as we have pointed out - a political crisis, not a food crisis.

To all that, of course, the EU is blind, concerned more to exploit the political advantages of situation, rather than address the root causes, and deal with them on a case-by-case basis.

To an extent, one is being charitable calling it "stupidity". The drivers are, in fact, more complex. One though is that "aid" has become an industry, the primary beneficiaries being the NGOs and other tranzies who have become a massive constituency supporting and sustaining the status quo.

The stupidity, in many respects, is in ourselves, who continue to allow this to happen, and in the political and chattering classes who still accept uncritically the "aid myth" and are more concerned with their own "feelgood" factors than addressing the reality of the damage their good intentions cause.

Nevertheless, it has to be said that, in some corners of the commission, there is a recognition that trade is essential, reflected in Mariann Fischer Boel's speech where she cites a policy paper which states, "A world short in supply and facing regional and country-specific fluctuations needs more options to trade, not less".

This is where, of course, the Doha Round comes in, and is why the "spat" between Sarkozy and Mandelson needed to be treated more seriously than on the "soap opera" level that some commentators chose. Despite the good intentions of the commission, the French are determined to sabotage the talks and, if they do, it will be a disaster – and one that will cost us dear.

Mariann Fischer Boel included in her speech yesterday with the words, "The first message is that we all need agriculture and that agriculture is much more central to many aspects of our way of life than we may realise." In that, at least, she is right. It is becoming vitally necessary that the rest of us wake up to that singular fact.