The right to a job 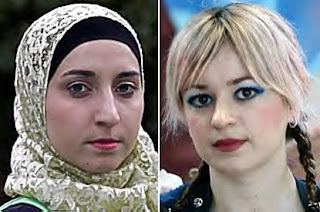 There has been a certain amount of fuss recently over the case of the sued hairdresser. The story is readily available in the MSM so I shall sum it up very quickly indeed. Ms Sarah Desrosiers runs a hairdressing salon in King's Cross, which specializes, as she puts it, in "funky urban hairstyles". I am not sure I know what it means but whatever it is the business has been successful. As it happens I know two young women whose hair is always beautifully cut, who had followed Ms Desrosiers when she left the big salon she had worked for and set up her own business.

In other words, we are talking about a talented, hard-working, entrepreneurial young woman of the kind this country needs many more of. Whether we are going to have them after this particular episode remains questionable.

Ms Desrosiers's problems started when she interviewed another young woman by the name of Bushra Noah for the position of a junior against her initial decision as the latter was not local. Ms Noah, it seems, pleaded for an interview and, according to Ms Desrosiers, arrived and behaved as if she had already got the job. In the circumstances, it is legitimate to ask whether she had been put up to this by some organization or other. Remember Shabina Begum? If not, see here, here and here. Come to think of it, whatever happened to Ms Begum?

The main problem with Ms Noah (there seem to have been several) was her refusal to remove her headscarf or allow even a wisp of hair to show from under it. (Actually, that is a nonsensical attitude anyway, as even the most devout Muslim women are allowed to take their scarves off in the presence of other women merely.) Ms Desrosiers considers, with some justification, that a hairdresser should show her own hair to the customers and be part of the hairdressing scene. The fact that this might sometimes put off potential customers is a calculated risk the hairdresser takes.

Ms Noah, who had already been rejected by 25 other hairdressing salons, sued Wedge, Ms Desrosiers’s business, for discrimination and hurt feelings. The story hit the media and support for Ms Desrosiers was widespread within and outside hairdressing circles. To this day if one reads comments on some of the very flip and silly articles on the subject one can see where popular sympathies lie.

Some of the reactions in the blogosphere have been predictable in concentration on giving in to Islamist pressure and multi-cultidom. But there are wider issues at stake here.

First of all, there is the question of what constitutes indirect discrimination, a concept defined in Directive 2000/78/EC and thus being outside the ability of Parliament to do anything about as being:

(i) that provision, criterion or practice is objectively justified by a legitimate aim and the means of achieving that aim are appropriate and necessary, or

(ii) as regards persons with a particular disability, the employer or any person or organisation to whom this Directive applies, is obliged, under national legislation, to take appropriate measures in line with the principles contained in Article 5 in order to eliminate disadvantages entailed by such provision, criterion or practice.

According to the article in the Daily Mail, for which I hope Ms Desrosiers received enough money to pay off Ms Noah:

But with regard to the issue of indirect discrimination, they found that Sarah had pursued a "legitimate aim - that aim being to promote the image of the business".

However, the burden of proof was on Sarah to prove that her means of achieving that legitimate aim was proportionate.

She was not able to prove her contention that employing someone with a headscarf would have the negative impact on her business's stylistic integrity that she feared.

In other words, Ms Desrosiers had shown no discrimination based on anything that was irrelevant to her business but the tribunal, made up of people who have, presumably, never had much to do with running anything to do with real enterprise, arrogated itself the right to decide whether "her means of achieving that legitimate aim was proportionate". The person who runs a business, who has taken all the risks and has put in all the work is not, according to this, qualified to judge such matters for herself without the wise guidance of the state's myridons. The fact that if she makes the wrong decision Ms Desrosiers will be punished by losing clients and, thus, profits is not an argument these people understand.

Secondly, there is the issue of being entitled to some job you happen to covet. Ms Noah's "strongest" argument was that she had always wanted to be a hairdresser and was being prevented from fulfilling her overwhelming ambition. Why anyone who thinks women should not show their hair should have that ambition is beyond me. Furthermore, I understand that she is now studying some other trade so the ambition has not proved to be overwhelming enough.

The question is does having that ambition entitles you to a job, whether you are qualified or suitable. The message to many of our young people is that it does. That is why we get all that whingeing about people wanting to be dancers but not getting any jobs from girls who have clearly never done any training.

There is legal support for this point of view on its way in, yes, you guessed it, the Constitutional Reform Lisbon Treaty. Article 15 of the Charter of Fundamental Rights (and most lawyers think that Britain's opt-out or opt-in or whatever you want to call it is not worth the paper it is written on) is entitled: "Freedom to choose occupation and the right to engage in work". Sounds fine. Why should one not be free to choose an occupation or engage in work?

However, the first item in that Article reads:

Everyone has the right to engage in work and pursue a freely chosen or accepted occupation.

This goes some way beyond nobody, particularly the state, having the right to prevent you from doing the work you want to do. This gives everyone the right to get the job they think is right for them or have always dreamt of having. I predict many more cases of the kind Bushra Noah engaged in and even fewer small businesses expanding.
Posted by Helen at 13:25