Hope there is none! 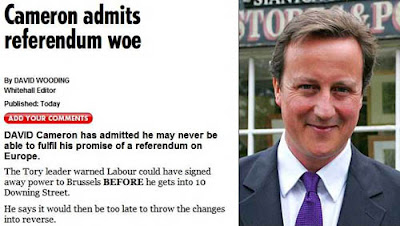 Predictably, UKIP is making hay of it – the story that first appeared in The Sun yesterday and now also finds its way into The Daily Telegraph.

In both, the text is very similar (which says something about the way the DT is going) having David Cameron admitting that he may never be able to fulfil his promise of a referendum on Europe. Says The Sun, the "Tory leader warned Labour could have signed away power to Brussels BEFORE he gets into 10 Downing Street," and, "He says it would then be too late to throw the changes into reverse."

He was, apparently, speaking to an audience in Harlow, Essex (part of his programme of touring marginal constituencies) when he was asked the dreaded "R" question. Then he admitted it would be "almost impossible" to have a referendum if it was already law in the UK and the rest of the EU. "We may have to say, well look, we're not happy with this situation, here are some of the powers we'd like to have back," he said, "But we can't give you that referendum on the Lisbon Treaty because it's already been put in place across the rest of Europe."

Actually, this comes as little surprise. Previously, Cameron and William Hague have consistently refused to answer the question and, the last time he was tackled on it Cameron dismissed such a scenario [of holding a post-ratification referendum] as "hypothetical". But, in a private word with Adam Bolton of Sky News he then went on to say that: "If we can hold a referendum at the next election, we will".

Now we know for sure what that sentence means: the Boy has come to the conclusion that "we can't". Now that the treaty ratification is close to its final stage, his earlier evasions are no longer tenable, he has come out in the open and said it.

Bizarrely, the Boy is still holding onto his fig-leaf that he could still try to claw back some powers from Brussels – most notably social policy – but, here again, textual analysis suggests that this is unlikely, hence the use of the conditional in his response: "We may have to say … here are some of the powers we'd like to have back".

In an earlier post, I wrote that "Euroscepticism is dead". In the first of my essays on that theme, I then wrote that, "…in the foreseeable future …there is no prospect whatsoever of the UK leaving the EU. I see no likelihood of a newly elected Conservative government seeking to do this. To that extent, I thus wrote, "euroscepticism is dead. It is a movement without an achievable goal …".

And the reason why our goal is not achievable is precisely because, as I noted, "it is to the Conservatives that we must turn ...". "Hope there is none," I concluded.

Cameron, in what should now be termed his "Harlow declaration" has simply confirmed what we always suspected of him. His new government, when it comes, will roll over and accept the status quo. Then, at the first opportunity, Cameron will "park" the EU issue. He has absolutely no intention of doing anything that might even slightly rock the boat.