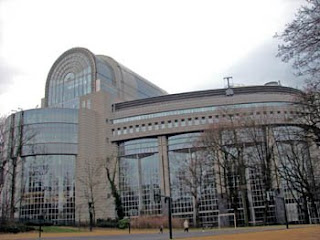 And he has every right to be. Having finally put to bed some reforms of the MEP expenses system, he rightly parades his small success in his column today, adding to it an analysis of the mindset of the "Euro-crooks" who masquerade as Conservative MEPs.

It has taken long enough for this to happen – I recall, as did many of us, including Hannan - writing and speaking about this in 1999 and many times thereafter.

What Hannan does not write about, though, is the reason why this overtly corrupt system has been tolerated for so long – and why there is now less resistance to change in the hallowed corridors of EU power.

Essentially, the "problem" for the EU parliament is that, traditionally, MEPs have been paid by their member states at the same rate as their own MPs, which leads to a huge discrepancy in salaries. While a UK MEP is currently paid £56,358, Irish MEPs get the same basic pay as Dáil deputies — £36,000. On the other hand, Italian and Austrian MEPs rake in about £79,000 a year; the "poor" Latvians take home a mere £11,000.

As a result, the EU parliament authorities have tolerated the shady practices on expense payments as a back-door method of levelling the playing field. There is a sort of rough justice here. The lower-paid MEPs tend to come from the peripheral states and are therefore able to milk more from the expenses system.

After the 2009 Euro-elections, however, payments become the responsibility of the EU parliament with salaries standardised at £66,000 per annum, giving the Latvians a massive 600 percent pay raise. British MEPs also come out on top.

With that, there is less need for back-door "equalisation". MEPs can pocket their enhanced salaries (taxed at a lower, more equitable Belgian rate – currently 11 percent – as a result of a deal with the Belgian authorities). In exchange, they forego some (but by no means all) of their expenses - in the interests of killing a long-running source of bad publicity.

Needless to say, the overall result is that MEPs will be better off (even Germans and Italians, who end up paying less tax) – which means they will cost us more. Furthermore, because the EU will now pay MEP salaries, and some states – which have previously had to pay their MEPs directly - are net beneficiaries from the EU budget, states which are net contributors, like the UK, will end up bankrolling not only their own MEPs but those of other member states.

To add insult to injury, we also pay a political price. The member states lose the last tangible link with their MEPs, as they are no longer responsible for paying them. This, in effect, is a further step in European integration: the MEPs become even more embedded in the "project" which they represent, being wholly economically dependent on it.

Nevertheless, 'tis a famous victory. But not for us. As with all "euro-victories", we end up the losers. Thus, as Hannan does write, the European Union is still a racket, whose main purpose is to look after its own – and nothing here has changed.