A bizarre twist to a bizarre tale 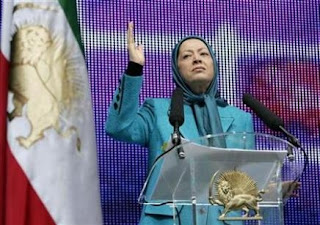 It was in June that Booker reported in on the puzzle our government's attitude to the People's Mujahideen of Iran (PMOI) – led by Maryam Rajavi (pictured). With the personal support of Tony Blair, it had persuaded the EU council to act in flagrant breach of EU law, refusing to remove the organisation from the EU's list of terrorist organisations, even after this had been told to do so by the ECJ.

Now, he is back on the case in today's column, reporting that on Friday, the PMOI successfully appealed against its inclusion on the British government's list of proscribed terrorist organisations.

We now have a bizarre situation where Blair's government, having first proscribed the organisation under British law, then got it included in the EU's list. Then, when the ECJ ruled against its inclusion, Britain led the way in encouraging the European Council to ignore the court. Now the Proscribed Organisations Appeal Committee, a branch of the High Court, has ruled that it should not be included in the British list either.

As Booker writes, this is one of the most baffling riddles of contemporary politics: why should our Government have repeatedly acted in breach of the law, to appease the murderous regime in Teheran, which has played a key part in arming the insurgents who are killing British troops in Iraq and Afghanistan?

Needless to say, the government is considering an appeal, although so devastating was the verdict that success is unlikely. What then will be interesting to see is how the government squares the verdict with its stance in Brussels, and how it can possibly continue pushing the EU ban when it has been unable to maintain one at home.