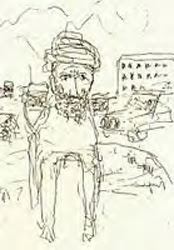 It has taken me a little while to work out what is happening behind the latest outburst of Islamic Rage about yet another cartoon, this time in Sweden. The best account I could find was by Paul Marshall, Senior Fellow at the Hudson Institute for Religious Freedom on NRO.

I don’t really like the cartoon in question. It is not funny and deliberately insulting, which the Danish ones were not. But then I do not like Salman Rushdie’s novels either. Come to think of it, I dislike Sir Salman’s political views even more and I would have disliked him getting a knighthood if it had not produced Islamic Rage. At that point I decided that there was something to be said for giving the man a handle. He is still a very poor writer in my opinion.

Anyway, here is the story of the Swedish cartoon.

Swedish artist Lars Vilks was invited by an art school to participate in an exhibit with the theme, of all things, of dogs. Vilks, something of a provocateur (his website has a cartoon of a Jew’s head on a pig’s body), submitted cartoons including one with Mohammed’s head on a dog’s body (it’s connected to the contemporary Swedish craze for “roundabout dogs,” but that’s another story). Before the exhibit opened, his drawings were removed by the organizers, citing possible security threats. Another gallery followed suit, claiming similar worries.

This provoked much discussion in the Swedish media. Although several other newspapers had already published the cartoons, it was only when Nerikes Allehanda, a regional paper in Orebro, published one of them on August 18 that the fur began to fly. Like the Jyllands-Posten cartoons of Mohammed published in September 2005, the cartoon was used to accompany and illustrate an article discussing self-censorship, threats, and freedom of religion.

It seems that the Swedish Muslims merely demonstrated peacefully outside the newspaper offices but, needless to say, world-wide Rage took off. Well, nearly.

Mr Marshall’s account of the Danish Cartoon Rage is slightly wrong. He says:

With the Danish cartoons it took four months before several Muslim governments, at the behest of an Organization of the Islamic Conference (OIC) meeting in Mecca, launched protests, boycotts, and threats, resulting in dozens of murders, especially of Christians. This time they took only nine days.

He appears to ignore the sinister role of the Abu Laban and other Danish imams who traveled through several Islamic countries, stirring up trouble, using cartoons they had concocted themselves and pretending these were the originals.

For all of that, Mr Marshall’s main point is correct. What we are witnessing is retrograde Muslim states attempting to enforce their own strict censorship rules on other countries.

First off we had Iran, a country we all look up to for its many virtues – freedom, economic well-being and the general happiness of the populace – which protested to Gunilla von Bahr, the Swedish chargé d’affaires. Just to show that this is all about hurt feelings, President Ahmadinejad informed the world that this was another provocation by the Zionists who have infiltrated the world.

Pakistan has also protested and sorrowfully told Lennart Holst, the Swedish chargé that they had “expected greater sensitivity on the part of the Swedish government”. The Swedish embassy apologized for any hurt feelings but explained that there was nothing they could do about a newspaper and freedom of speech was protected by the Swedish constitution. These are not points that have ever appealed much to the average Islamic government. There is always something they can do with a newspaper.

What Mr Marshall says next can be seen as extremely sinister but for the fact that nobody pays a blind bit of attention to what the UN decides:

The reasons for these actions can be found in Pakistan’s further statements. The foreign ministry announced that it would consult with the OIC “to determine the future course of action against the repetition of such provocative publications,” and through the United Nations would “find ways of addressing the recurring defamation of Islam and its sacred personalities.”

Undoubtedly the subject will come up at the next anti-racism conference, even now being organized by the UN committee, chaired by Libya with Iran playing a leading part.

Somehow, I suspect that these problems will not be discussed by the UN Human Rights Commission:

Egypt has been unusually active in the last few weeks in quashing all dissidence and dissidents in the name of Islam. State Security has intensified its interrogation of Quranist Muslims, whose view of Islam is open to democracy and religious freedom, on the grounds that they have insulted Islam. On August 8, it also picked up Adel Fawzy Faltas and Peter Ezzat, who work for the Canada-based Middle East Christian Association. They were arrested on the grounds that, in seeking to defend the human rights of Egyptian Christians, and human rights in general, they too had “insulted Islam”.

Nerikes Allehanda, the newspaper in question, is being insouciant, with the editor explaining that he does not care much about what foreign governments say or not say about his publication, being more interested in the local community.

Gates of Vienna gives a useful background to all those dog cartoons.

Mind you, as Rage goes, this is nothing. Are they all on holiday?
Posted by Helen at 19:31