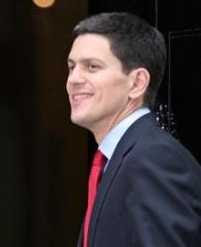 With all the hype over the debut of Gordon Brown, answering his first prime minister's questions yesterday – to be revisited in today's newspapers - it is easy to forget that, the day before was David Miliband’s debut, taking questions as foreign minister. So easy, in fact, was it to forget that we did precisely that, until reminded by yet another of our alert readers.

Yet, while the "stars" preen and posture, it is during events such as these that the foot-slogging battle over the EU treaty-to-be is being fought, unrecorded by the media, leaving only its mark in the Official Record (otherwise known as Hansard) for future scholars to pour over – and for us "deviants" to get excited about. But it is here that the battle is beginning to take shape.

Of special importance was a question posed by William Hague, the shadow foreign secretary, who challenged Miliband on the comments of Giscard d'Estaing.

He, as readers will recall, had declared, of the European Council's "mandate" that: "This text is, in fact, a rerun of a great part of the substance of the constitutional treaty", adding, "the public is being led to adopt, without knowing it, the proposals that we dare not present to them directly."

In was in the answer, however, that one sees the government's strategy, in holding the line against such assertions, maintaining that the "mandate" is not a re-run of the constitution.

Miliband refused to be drawn on the Giscard statements, but instead referred directly to the first clause of the "mandate", which "clearly states":

The constitutional concept, which consisted in repealing all existing treaties and replacing them by a single text called "Constitution", is abandoned —

"Not reformed," said Miliband, "not amended, but abandoned. The constitutional treaty has been abandoned. That is not just my view, nor is it just the view of our Prime Minister - it is the view of the 27 Heads of Government who signed the document."

The exchange continued but it need not trouble us, as we have the bones of the argument. It is developed by sleight of hand and relies on the substitution of one word with another. To see how it works, we have to note how Miliband refers, in the first instance, to the "constitutional concept", calling in aid the "mandate" as his authority.

Now, this "concept" was an innovation in producing treaties. All previous affairs had taken the form of amendments to the original Treaty of Rome. It was these amendments, and only these, the formed the basis of each subsequent treaty, until the constitutional treaty. Then, it was decided to absorb all the treaties and the proposed amendments into one consolidated text, which was to form the new treaty. That was the "constitutional concept", as indeed the "mandate" indicates.

The trouble with that was people - many for the first time - were able to see the full text and take on board how many powers had been ceded to the EU. Not a few of the complaints over the text actually related to powers handed over in previous treaties.

Thus, the "colleagues" decided to abandon this "concept" and revert to producing another amending treaty, only this time they would call it a "reform treaty".

And there we have the slight of hand. Miliband takes the phrase, "constitutional concept" and changes one word, to produce "constitutional treaty". In one fell swoop, the "treaty" has been abandoned. Except that it hasn't.

Interestingly a similar tactic has been tried before – by Tony Blair, when he reported on the European Council. Then, he offered the first clause of the "mandate" without even embellishing it, relying on his showmanship and emphasis to slide the point past the House.

Plodding in his wake, Miliband is trying the same trick, with the embellishment. It is clever, but dishonest – exactly what we expect from our politicians.