Let's be done with it 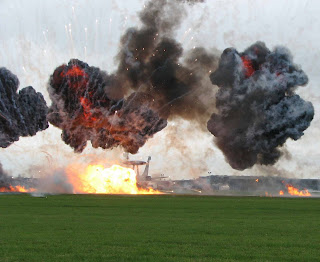 As numerous defence issues have stacked up while we have turned our attention to the European Council "mandate" agreement – which much of the media insists on calling a treaty agreement - I was minded to write one long "catch-up" post this weekend, to cover as many of the outstanding subjects as I could.

There is part of me, however, that says, "why bother?" It is increasingly hard to focus on some of the technical aspects of the campaigns in Iraq and Afghanistan – in the hope of enhancing the performance of our troops (and their safety) and thus winning the wars – if the game is being given away at a higher level.

In a nutshell, one must ask whether there is any point in our devoting blood and treasure in the pursuit of establishing democracy and independent governance in either of the troubled regions in which we are engaged if, on the other hand, our own leaders are intent on giving away ours - to the European Union, while also permitting the steady march of unrestricted immigration, which is changing the fundamental nature of our society. What is the point of fighting for democracy in foreign fields, and the integrity of their societies, when we are at risk of losing both ourselves?

Perhaps this affliction of doubt comes from reading the crop of today's newspapers when, try as I might, I could not see any relationship in the storm of political comment and the real world – or the world as I perceive it. Never before has the world of politics seemed so unreal or so detached that, reading about it seems almost like intruding into the secret rites of the inhabitants of a distant planet. 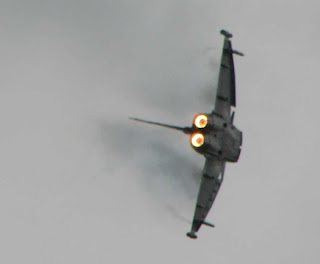 Another troubling thought comes from a long conversation I had with a serving RAF officer yesterday who affirmed what I had heard so many times before, on the structure and equipment of the armed forces. I got from him what I have heard so often elsewhere, that the Services cannot afford to focus on the current wars in Afghanistan and Iraq as that would leave them unprepared to fight future wars. The effort in our current theatres must, therefore, be tempered by the need to maintain balanced forces, capable of dealing with future (unknown) commitments.

I have likened this to a military planning committee deciding in 1943 to withhold forces from the invasion of Normandy and the defeat of Hitler for fear of being unprepared to fight a war in the 1950s.

The point that emerges here is that the military – no less than the nation in general (each for their own different reasons) – is not committed to the current wars. As we listened to the RAF commentator coo and gasp at the performance of the Eurofighter, delivering a torrent of propaganda in favour of the new "toy" as it went though its paces (admittedly impressive), one's impression was somewhat reinforced that fighting wars in distant fields were regarded as an irrelevance at best, a distraction from the real business of constructing that mythical beast, the "balanced force". 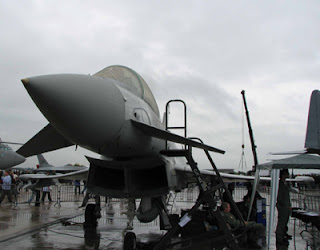 Frankly, if neither the military nor the population – to say nothing of the media and the political establishment – are committed to winning our current wars then (no matter how vital it is that we do win them) we have no business sending our troops there, some of them to die and many more to suffer horrific injuries. We might just as well bring them home to play with their "balanced" force and forget all about the untidiness and inconveniences of real fighting.

The military can then parade and posture with their gleaming new "toys" at airshows and the like, fighting mock battles – as they do now (see top pic) – from the safety of British RAF airfields. Then they need not be troubled by the thought that there is a real enemy out there who not only shoots back, but doesn't obey the rules.

In other words, there is little point any longer, it seems to me, in our fighting a battle to ensure that our troops are properly equipped to fight real wars. Our hearts are not in it. Let's be done with it. Bring them home, to where the fight for our own sovereignty is the task we must now face.