A lack of connections 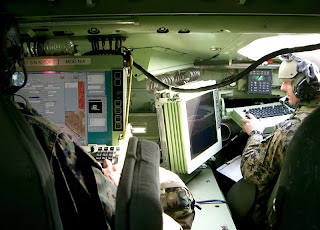 "British troops 'lack equipment' to avoid friendly fire" said the The Guardian yesterday, trailing a report from the House of Commons Committee of Public Accounts with the somewhat more prosaic title of "Progress in Combat Identification".

According to The Guardian, which makes a fairly decent job of summarising the report's summary, British soldiers do not have viable combat identification kits to help them avoid the risk of "devastating" friendly fire incidents.

Furthermore, says the paper, the (Public Accounts) Committee found that, despite criticisms made by MPs 15 years ago, equipment for identifying troop formations had been "delayed, deferred or rescoped", partly because of the failure of Britain's allies to co-operate. As a result, what the MoD calls a "battlefield target identification system" will not be available until the next decade.

To emphasise the need, for this equipment, the committee reminds us of the four "friendly fire" incidents in Iraq in March 2003, an American Patriot missile shot down an RAF Tornado aircraft, killing the crew; and American A-10 "tankbuster" aircraft killed Corporal of Horse Matty Hull of the Blues and Royals; a British Challenger 2 tank engaged another outside Basra, killing two soldiers, and a Royal Marine was killed by others.

That cues a quote from Edward Leigh, chairman of the committee, saying, "Friendly fire deaths during the 2003 Iraq war have shown just how important it is to ensure that the firepower of our forces on the battlefield is directed at the enemy - and not at our own servicemen and women or at civilians. But progress by the MoD has been poor."

Now for a bit of joined-up thinking - one of those modern-day mantras, honoured more in the breach than the observance, no more so than in the House of Commons and the media.

It is less than two months since we had the furore over the A-10 "friendly fire" incident and we now have Mr Leigh acknowledging that a "battlefield target identification system" is an important aid to preventing such incidents. But, as we have observed, in two separate posts (here and here), such a system was available in Iraq in 2003 – called the "Blue Force Tracker".

As we also noted, the equipment was given to our forces by the US but, as the US report indicated, through lack of training and experience (and, most probably, the lack of any high-level commitment to the equipment), British forces failed to take advantage of the system in, in one case, actually returned the equipment to the Americans.

It is too much to hope, I suppose, that either the Select Committee or the media could make the connection but, had they done so, they would have made a far more important contribution to our knowledge than their superfical appreciation of the subject.

The lack of connections, however, do not stop there. It is far too simplistic to attribute the delay in providing British-sourced systems even partly to the failure of Britain's allies to co-operate. The systems are an integral part of the net-centric warfare concept and are thus, to be embedded in the Future Rapid Effects System (FRES) (neither of which are mentioned), which seems at the moment to be on the back-burner, not least because of the technical problems associated with it.

There was also the prospect that the systems would be integrated with Bowman, but such have been the problems getting that system up and running that any idea of tying it in with the "friendly" identification system has been shelved for the time being. Yet, integrating the equipment (as illustrated above, in a modern armoured vehicle) is essential.

As to the situation with our allies, the US is not without its technical problems, as this article pointed out. Such systems are at the cutting edge of technology and, as neither the UK nor the US have been able fully to define the capabilities or even the technical specifications of their systems, it is hardly surprising that there are difficulties in securing interoperability.

Then there is the European dimension. Not only is the EU – in pursuit of the "European Defence Identity" – determined to pursue its own systems and standards but Nato is also working on systems, notionally with the US, Canadian and European states. This confuses and complicates the situation, further exacerbated by the fact that some Nato members do not have the security clearance to participate in this type of work.

Missing entirely from the report, however, is any reference to these difficulties and thus those media sources which publicised the report failed also to address the issues. All we get is a cut-down version of the Select Committee report, with all its limitations.

On the face of it, it is rather odd that the Public Accounts Committee took on the examination of this complex technical subject. It might, more appropriately, have been handled by the Defence Committee, although one can have no confidence that it would have done a more thorough job.

But, as Edward Leigh did demonstrate – this is no dry, academic subject. The bottom line is that lives are at stake. Thus, if we saw a few more connections being made, we might have been given a better understanding of where the real problems are, and how they might be addressed.

As it is, the politico-media axis lets us down again and has nothing really to offer.