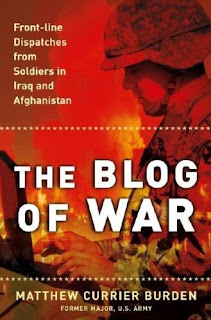 Even as we were complaining about our own military's hamfisted approach to publicity, a situation has developed over in the United States which has had American (right wing) blogs rising up in a storm of complaint.

Fronted by Martin Hewitt at Town Hall, with Confederate Yankee, Michelle Malkin, Blackfive and others, this is the recent regulation requiring milbloggers to clear all their copy with their commanders before posting.

Milblogging is very much an American phenomenon, explained in a useful background article by The Washington Post, which has transformed war reporting in Iraq and elsewhere. It has allowed soldiers in theatre to post their own accounts of actions – and their more general observations – by-passing the leaden grip of the MSM.

Having been allowed an incredibly light touch, it is feared that the new regulation will effectively close down much of the milblogging "community" and many popular sites have already shut up shop. Issued in the name of "OPSEC" – operational security – various theories abound as to why the regulation was really issued. But the consensus amongst the US blogs that have reported the issue seems to be that this is a bad day for freedom of speech.

Even worse, it signals the military's failure to understand the importance of the "information war", conceding the ground to the "bad guys". It reinforces the grip of the leftist-leaning, largely anti-war MSM and deprives the troops on the ground an opportunity to redress the balance.

It says much for the USA, however, that there is a storm of protest in support of milbloggers. In the UK, the nearest equivalent is the unofficial Army forum, known as Arrse, which offers little by way of first hand experiences of soldiers and consists largely of a diet of regurgitated MSM stories and a level of comment that could be, at its kindest, described as "pub talk".

On the other hand, we have the MSM, with all its limitations, and the official MoD website, the inadequacies of which have, in the recent past, been only too evident.

As for the British blogosphere, unlike its US counterpart (both left and right), the "war on terror" is largely ignored and military issues rarely reported – and then more usually at the same level of superficiality as the MSM. Not only is there little contribution to the "information war", the blogosphere seems largely unaware that it is being waged – and is indifferent to it.

By this means, we are indeed losing the war, on the both sides of the Atlantic through bureaucratic incompetence which, on this side, is reinforced by a tidal wave of indifference. It seems as if we are content to concede defeat without even a battle.