Not the half of it 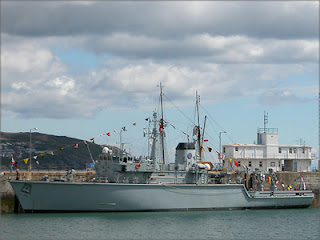 In a letter to The Daily Telegraph today, Lt-Cdr Mike Critchley RN Rtd, editor of Warship World makes some interesting points about the Iranian hostage debacle.

Under the heading, "Navy needs to get its laid-up patrol vessels into the Gulf", he suggests that it is madness to have laid up at Portsmouth three vessels (Brecon – pictured - Dulverton and Cottesmore) that were converted at great cost as patrol vessels to intercept suspect shipping.

He notes that we deployed one of our remaining frigates in the fleet (HMS Cornwall), armed with the latest sensors and weapons (Goalkeeper, Harpoon, Seawolf and torpedo tubes) to protect oil flowing from Iraq, but were humiliated by small craft with the simplest small arms.

Critchley writes: "our multi-million-pound vessel was unable to join the action and defend our men for lack of water under her keel, whereas something smaller would have been appropriate."

From this he concludes that, once again, the Treasury is not giving our servicemen the kit to do the job asked of them. He thus asks that these three vessels at Portsmouth should be returned to service as soon as possible for deployment to the Gulf or even the Straits of Dover - wherever the terrorist threat exists.

That is good stuff, and it does point up the theme which we have been addressing on this blog, but Lt-Cdr Critchley does not seem to be aware that we already have two modern minesweepers out in the Gulf, HMS Blyth and HMS Ramsey.

Furthermore, Critchley does not seem to realise (or, at least, acknowledge) that we are in the Gulf working as part of a coalition team. As we reported yesterday, whatever problems Commodore Nick Lambert might have had, he had no shortage of naval assets on which to call. It was not for lack of shallow draught patrol vessels that the two boats from HMS Cornwall were sent unescorted to their rendezvous with the Iranian revolutionary guard.

However, if we do take Crichley's point that there is a general shortage of shallow-draught patrol vessels, then the situation is even worse than he makes out. Of the 12 Sandown class minesweepers built for the Royal Navy - represented by HMS Blyth and HMS Ramsey - only eight are still in service.

Three of the vessels were decommissioned following the 2003 Strategic Defence Review (another was used as a training ship) and sold to Estonia in September 2006, an episode not dissimilar to the sale of the Army's armoured Mambas to Estonia, only for them to reappear alongside unarmoured British Land Rovers in Afghanistan.

One way or another, British defence policy is looking increasingly surreal.