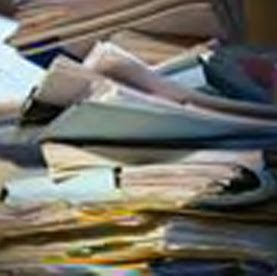 Amidst all the excitement of last week and the visible disintegration of Britain’s reputation across the world, one thing remained certain: the European Union carried on producing documents.

The form dated 30th March 2007 has just over 10 sides of A5 for the listing of European documents and another side or so for Explanatory Memoranda, produced by our own civil servants, to explicate documents that had been in the previous list. With me so far?

Let us go into a little detail because these are the documents that have enabled Britain “to punch above her weight” and “to have a greater influence on world affairs”.

The first side of A5 merely lists fifteen editions of the Official Journal of the European Union, in itself a compilation of Information and Notices (Series C) and Legislation (Series L). A careful perusal of these interminable Journals will give anyone a clear (though mudlike in complexion) view of what is coming in from the European Union into this country by way of legislation, regulation and just general mayhem. I recommend a course of it to anyone who thinks the “European issue” is of little significance.

Moving right along, we come to Tenders and there is only one document listed, Contrax Weekly, Part One, undoubtedly of importance but I may have lost the will to live as I tried to find it on the internet.

Then there are the Working Documents. On 30th March there were 26 listed. It is not possible for me to copy all the titles, so I shall give a few examples, in order that our readers appreciate what a valuable contribution all this makes to our well-being and how far it all enhances our standing in the world.

A6-0019/2007 5th February 2007 - *Report on the Proposal for a Council Decision on authorising Member States to ratify, in the interests of the European Community, the 2006 Consolidated Maritime Labour Convention of the International Labour Organisation.

Then we get three reports, proposals and recommendations from the European Parliament on the EU negotiating for various agreements with the Andean Community and its members, the countries of Central America and something to do with Bosnia-Herzegovina. This is just in case anybody thinks that individual countries in the European Union can negotiate by themselves.

A Roadmap, one must assume, will lead to Decisions and Recommendations, possibly to Regulations, there being plenty of Directives on the subject.

The next one is rather sinister as, theoretically, the Charter of Fundamental Rights has no powers until the European Constitution has been ratified and implemented.

A6-0036/2007 12th February 2007 – Report on compliance with the Charter of Fundamental Rights in the Commission’s legislative proposals: methodology for systematic and rigorous monitoring.

The next one is a real corker. How anyone can doubt that this will improve Britain’s standing in the world, I cannot understand.

A6-0038/2007 1st March 2007 - *Report on the Proposal for a Council Regulation amending Regulation (EEC) No. 1883/78 laying down general rules for the financing of interventions by the European Agricultural Guidance and guarantee Fund, Guarantee Section.

I am going to skip a few Working Documents as I do not want to be held responsible for the fatalities among our readers. A bit further down we get the following four:

A6-0043/2007 2nd March 2007 - ***I Report on the Proposal for a Directive of the European Parliament and of the Council concerning integrated pollution prevention and control (codified version). [That means a Directive to bring together all previous Directives on the subject with a few additional points.]

A6-0044/2007 2nd March 2007 – Report on the islands and natural and economic constraints in the context of the regional policy.

A6-0045/2007 2nd March 2007 - ***I Report on the Proposal for a Directive of the European Parliament and of the Council on the identification of controls, tell-tales and indicators for two- or three-wheel motor vehicles (codified version).

A6-0046/2007 2nd March 2007 - ***I Report on the amended Proposal for a Directive of the European Parliament and of the Council on injunctions for the protection of consumers’ interests (codified version).

Of course all these proposals for Directives will, in the fullness of time, become just that, possibly in a version that is even less palatable than the original proposal. And Parliament will not be able to do anything about it, though, I have no doubt, there will be much wailing about the lack of scrutiny.

As I am now rapidly losing the will to live I shall quote only three more Working Documents before going on to Draft Legislation:

C6-0061/07 Proposal for a Directive of the European Parliament and of the Council amending Directive 98/70/EC as regards the specification of petrol, diesel and gas-oil and introducing a mechanism to monitor and the introduction of a mechanism and reduce greenhouse gas emissions from the use of road transport fuels and amending Council Directive 1999/32/EC, as regards the specification of fuel used by inland waterway vessels and repealing Directive 93/12/EEC.

No, I know that last one makes no sense at all but I have copied it as it is written and can only surmise that whoever was putting together this document became catatonic with boredom.

So let us pass on to Draft Legislation. Only 25 in this lot and some of them are of secondary importance. This one, for instance:

There are several documents to do with military operation in DR Congo (well, not so much military as sort of being around, though not too close to the scene of action during the elections) and the establishment of a possible International Civilian Mission in Kosovo.

Still, here is an honest to goodness Regulation:

7291/07 Proposal for a Council Regulation amending Regulation (EC) No. 527/2003 authorising the offer and delivery for direct human consumption of certain wines imported from Argentina which may have undergone oenological processes not provided for in Regulation (EC) No. 1493/1999.

And one honest to goodness Directive, the only part of all this taradiddle that is actually going to have to go through Parliament though, probably, only as secondary legislation:

One more Directive and I shall let you all go:

So it goes, week after week, month after month, year after year, regardless of elections, parliamentary sessions and world events.

Email ThisBlogThis!Share to TwitterShare to FacebookShare to Pinterest
Labels: legislation