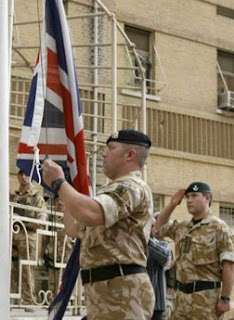 The Union Jack was lowered for the last time in another bit of Basra yesterday, this time the British Army base at the Shatt al Arab Hotel – the northernmost of our bases in the city – as it was handed over to the Iraqi Army's 10th Division.

A number of Middle East papers carried the news, and the CNN website ran it but, at the time of writing, no mainstrean British news media had reported it. Thus does our inexorable retreat continue unremarked, leaving the British population largely ill-informed.

The Old State Building in the centre of Basra went on 20 March, also to the 10th Division of the Iraqi Army – although there are no reliable reports as to its fate. The massive Shaiba logistics base, to the south of the city – based on an old Iraqi Air Force air base – will go later this month and Basra Palace is expected to follow by late summer.

That will leave Basra Air Station, five miles to the west of the city, in which British forces will concentrate for as long as our government feels the Shia militias need target practice. 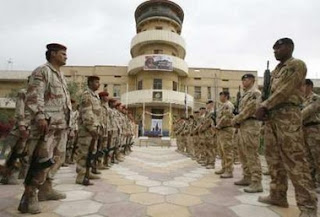 In command is Major-General Jonathan Shaw, who seems well-versed in Blair-speak. He decribes this process as a "repositioning" rather than a withdrawal, and denies hotly any suggestion that his troops have been "bombed out" of their other bases.

Nevertheless, there is recognition that the situation on the ground is not secure, so there is no longer any talk of handing over control of Basra province by the spring.

The human cost of the retreat, however, is high and likely to increase. As others have done before, The Sunday Telegraph reports fears that, hemmed into their single, isolated base (with very few roads into the city), troops will be prey to ambushes, leading to a significant increase in casualties.

Even now, virtually every time patrols venture onto the streets, they are attacked by heavily armed insurgents, or roadside bombs. And, with easily observable routes from Basra Air Base into the city, insurgents are able to observe military movements and set up their ambushes in good time. British commanders, The Telegraph says, now admit that the number of attacks against coalition forces are beginning to escalate dangerously. 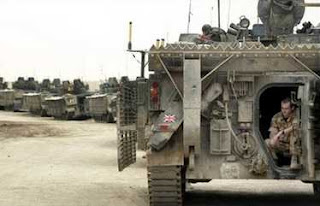 Movement by military convoys around the city is also becoming increasingly more difficult and even the shortest journey borders on being a major operation, with routes having to be cleared by Army dog handlers checking "vulnerable points" - such as areas where roads narrow - for hidden explosives.

Thus, we are told, the eight miles to the airport can take more than five hours to travel because it is no longer possible to take a direct route in and out of Basra. And, says one officer, "it is only going to get worse."

On the back of the Iran hostage debacle, however, even strong supporters of the British presence in Iraq – like this blog – are losing faith in the military's ability and will to contain the situation. Public support – fragile at best – is ebbing fast and military morale, already low, has plunged even further as troops come to terms with the humilation dealt to them by the kidnap of the British hostages.

With the Iranian-backed Shia militias emboldened by Ahmadinejad's propagada coup, and a British new prime minister shortly to take over the reins - himself not an enthusiast for military adventures - it can only be a matter of time before the inevitable happens, and the "repositioning" does become a complete withdrawal.

Marking the end of the road for Britain as a credible military power, as it stands, the situation does not look to be recoverable.