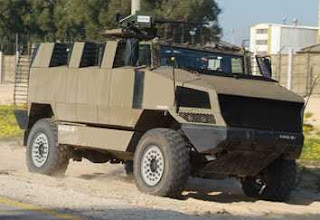 It was in early February that we reported on the US Marine Corps plan to buy over 4,000 Mine Resistant Ambush Protected (MRAP) vehicles for US forces in Iraq and Afghanistan.

At the time we focused on the much admired RG-31, but the USMC actually issued contracts to nine vehicle makers in a major competition for what could eventually be a $6 billion order.

News of the moment is that the USMC has now issued further contracts to five companies on the original list, three being added on Wednesday. The largest of these three went to Protected Vehicles in North Charleston, South Carolina, which won $37.4 million to make 60 trucks. It is offering a vehicle called the Golan (see also here), produced in partnership with the Rafael Armament Development Authority in Haifa, Israel, and Battelle Memorial Institute in Columbus, Ohio (pictured above).

As you would expect, this news has been ignored by the MSM, although it was picked up by the Arab media which reported that Israel was to supply the US Marines in Iraq with specially equipped armoured vehicles. 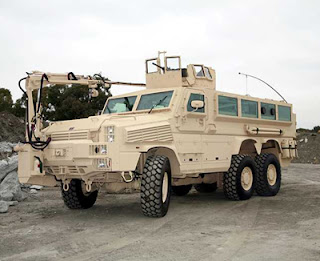 Other winners, according to Bloomberg, are General Dynamics and Oshkosh Trucks. General Dynamics got an order to produce 20 variants of the RG-31s while Oshkosh, which builds a range of trucks for the US military, is to supply the 13-ton Bushmaster armoured vehicle currently in use by the Australian Defence Force and Dutch Army. The two companies which have already been given add-on contracts are BAE Land systems, for its RG-33L (pictured), and Force Protection, with its Cougar series.

Each of the vehicles have the common features of a raised chassis and V-shaped hull. This, as Defense Industry Daily points out, marks a "collective realization" sinking in that up-armouring flat-bottomed vehicles which are not designed to take that kind of weight, and which have strict limits on the level of protection they can ever provide, is an inadequate response to the need for blast-resistance.

That "collective realization", however, barely extends to the British military, and has completely eluded the British media, whose defence correspondents seem blissfully unaware of a military revolution going on right under their noses. Thus, in the fullness of time, the US military will have replaced every one of its Hummers engaged on tactical duties with a new breed of vehicles, without the media even noticing.

And still, I suspect, the British politico-military establishment - as it continues to send young men to their deaths in wholly inadequate vehicles - will be preening itself on its intellectual superiority over those crass Americans.