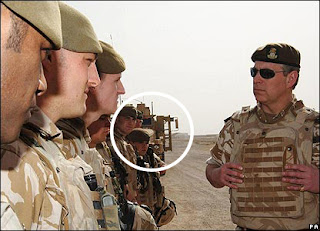 The Duke of York met members of the 1st Battalion The Yorkshire Regiment in Basra on Saturday. The regiment's Colonel-in-Chief, Andrew also saw the Shaibah logistics base. A few hours later mortars and rockets hit the Basra Palace base, used by multi-national forces, in a separate part of the city.

That, amazingly, is what the BBC thinks important – missing, quite literally, the "bigger picture". That is behind his nibs - the first appearance in public of the famed Mastiff mine protected vehicles. 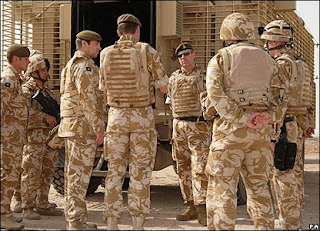 And, going from the sublime to the ridiculous, as well as a ride in a nice safe area in an under-armoured "Snatch" Land Rover, he gets to see the Mastiff, which has not only been fitted with extra side armour, it seems to have acquired an all-round cage of slatted armour. No wonder they have taken so long to get into service.

And, considering the RG-31 was thought to be "too big for Basra", not only has the MoD bought a bigger vehicle, it has added to its width and length with the extra armour. I guess size wasn't such a critical factor after all.

Now, if only those blokes in the berets would get out of the way, we could get a better view…