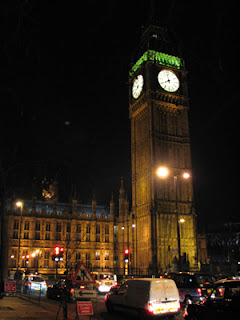 A tome of nearly 45,000 words would qualify as a small novel but it is also the typical size of modest debate in the House of Commons. And such was the length of the defence debate in the Commons on Thursday, under the title "Defence in the World".

This was an adjournment debate, which means there was no vote. With such a broad title, this conspired to make it a dull, shapeless affair which came to no conclusions and produced very little of consequence – and certainly little that we had not heard before.

However, while the media failed to take any notice of the debate, there was at least one sub-agenda, which emerged when secretary of state Des Browne offered a spontaneous comment "on the increasing threat to our bases from indirect fire, principally rockets and mortars." He told us:

I discussed that with commanders in Basra on Tuesday. The increase in indirect fire is a worrying trend. The threat is becoming more sophisticated and dangerous, and the links to Iran and Hezbollah are more evident. Our forces are not standing idly by as the threat develops—they are taking steps to deal with it by targeting the terrorists through intelligence-led operations, and with some success. We are also always looking to strengthen our defensive measures, but Members will understand that for reasons of operational security I am not in a position to say much more than that on the subject, other than to assure the House that we take it very seriously and that we acknowledge the risk our brave men and women face.

This was picked up by Gerald Howarth who noted that there was a system called the Mamba "which is able to track incoming mortars and provide an accurate fix on their source." Could he, asked Howarth, "reassure us that sufficient such devices are available to our armed forces in Basra to ensure that we have the maximum protection?"

As he did with his response to Ann Winterton, Browne took this seriously but refused to put information into the public domain that would jeopardise operational security.

You would have had to have had a journalist in the gallery who understood the issues to pick up on this and, inevitably, no such creature existed. Somebody, some time later, might take one of the poor little dears aside and spoon-feed them with the details but, until then, nothing will emerge.

Anyhow, it would be wrong of me to say that there was much more of interest. The trouble with debates of this nature is that they are so wide-ranging that they tend to be highly superficial, no more so than the response by the shadow secretary, Liam Fox.

One would actually like to be complimentary, if only because it is not always a good idea to be negative. A little bit of encouragement goes a long way. Unfortunately, we cannot do this – even if the problem was not what was said, but what was not.

However, rather than inject our own words to illustrate the nature of the deficiency, we shall use some from a US Department of Defense press release yesterday, citing the new defense secretary Robert W. Gates. "Debate about operations in Iraq is completely appropriate,” he says, adding that he believed the debates centred "not on whether there's any option except to win, but on the best way to reach that objective."

That was what was missing in this debate. We are a nation at war and, by any candid assessment, things are not going well. Nor could anyone sensibly say that the government is entirely on top the situation, or is completely in control. The debate, therefore, was wide open for some constructive suggestions as to how best to win the wars in both Afghanistan and Iraq.

In terms of any specific detail, there was nothing on offer. For sure, we had ritual complaints about a wide range of issues and a few generalities - but nothing bankable, nothing that you could mark down and say was a good, workable idea.

What we did get though, from another member of the Conservative defence team, Dr. Julian Lewis, was an illustration of the dangerous complacency and arrogance that pervades some parts of the establishment. Said Lewis:

I mean no insult to the record of the American armed forces when I say that Britain's achievements in counter-insurgency campaigns in the past feature lessons that can usefully be learned by our allies, and that, along with some of my colleagues, I am not entirely sure that they are always prepared to listen and take those lessons on board.

This is from the representative of a nation that is struggling to put 20 Mastiff mine protected vehicles into Iraq, when the US is looking at better than 4,000 RG-31s.

There lies the disappointment. It was all very well for minister of state Adam Ingram to declare of our armed forces that, "we really do recognise that they are the best in the world", except that they are not. We may – and in fact do – have some good elements, some good people and some very dedicated and brave service personnel, but that does not make for the best armed forces in the world.

But we also have poor equipment, poor structures, poor administration and some singularly bad leadership. We are far from convinced that the top Army brass have got a grip on the situation or are acting in the national – as opposed to their own sectional – interest.

How things could be made better though is not clear. This is why we really do need a debate – a serious, intelligent debate, not just ritual offerings and point-scoring. Not for the first time, therefore, do we suggest that the opposition needs to raise its game.