By their friends shall you know them 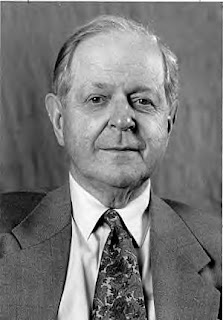 Robert Conquest will be ninety this year as he was born in year one of the Russian Revolution. This is slightly incredible if one reads the account Christopher Hitchens gives of the man's activity and medium-term plans:

When I called, he was dividing his time between an exercise bicycle and the latest revision of his classic book "The Great Terror": the volume that tore the mask away from Stalinism before most people had even heard of Solzhenitsyn. Its 40th anniversary falls next year, and the publishers need the third edition in a hurry. Had it needed much of an update? "Well, it's been a bit of a slog. I had to read about 30 or 40 books in Russian and other languages, and about 400 articles in journals and things like that. But even so I found I didn't have to change it all that much."...

His diffidence made me inquire what else might be keeping him busy. "My publisher wants me to do a book called 'How Not to Write About History,' and I thought, yes. Then I'm doing an essay on the importance of India, and something about the U.N. and internationalism." ...

On top of that he is putting together another volume of poetry, planning a book of limericks and is about to start writing his long-awaited autobiography. Makes you tired just to read about it.

So what is so special about Robert Conquest? Apart from being a poet, a literary critic and a writer of science fiction he is one of the foremost experts on the Soviet Union. As Hitchens mentions, the first edition of his seminal book "The Great Terror" came out forty years ago next year.

He produced other important studies of the Soviet horror, notably "The Harvest of Sorrow", the first remotely accurate analysis of the collectivization and the famine that was deliberately created by Stalin and his henchmen in the villages of the Soviet Union.

The latter book has been translated into Russian and Ukrainian and is being distributed by a Ukrainian charity. Conquest's importance has been acknowledged the length and breadth of the former Soviet Union. In fact, it was acknowledged even before, as he tells it himself:

"There was a magazine in Russia called Neva, which found its circulation went up from 100,000 to a million when it serialized 'The Great Terror.' And I later found that at the very last plenum of the Soviet Communist Party, just before the U.S.S.R. dissolved, a Stalinist hack called Alexander Chakovsky had described me as 'anti-Sovietchik No. 1.' I must say I was rather proud of that."

When "The Great Terror" came out Conquest was vilified by all the bien pensants in the West for "exaggerating" the numbers of victims. Since then he has not just been proved right (as have other people like him, all attacked at the time) but he found himself in the odd position of being told by Russian historians that, as a matter of fact, he had underestimated somewhat.

As I have written before the debate about the Common Market divided the so-called Cold Warriors. Conquest was one of those (as was my father) who was against the very idea of it, preparing rather reluctantly to vote for Douglas Jay in his constituency on that one topic. Then, as now, there was little distinction between the parties on any subject.

He has continued to be an opponent of the European idea and, in particular, of Britain's participation in the project. In fact, he is one of the first Anglospherists, seeing a great future of the countries who have taken their law, politics and economics from Britain.

As Hitchens says a little ruefully:

In his most recent books, "Reflections on a Ravaged Century" and "The Dragons of Expectation," he goes beyond the usual admonitions against Jacobinism and more recent totalitarian utopias, and argues for "the Anglosphere," that historic arc of law, tradition and individual liberty that extends from Scotland to Australia and takes in the two largest multicultural democracies on the planet--the U.S. and India.

There was a time when this might have seemed quixotic or even nostalgic (at least to me), but when one surveys the wreckage of other concepts, and the increasing difficulties of the only rival "model" in the form of the European Union (of which he was an early skeptic) the notion seems to have a future as well as a past.

One always welcomes prodigals and Christopher Hitchens is one, most definitely. Over the last few years he has become the scourge of the anti-Western left. His admiration for Conquest shows his essential intelligence and understanding. His burgeoning Anglospherism puts him definitely into the camp of the good guys.