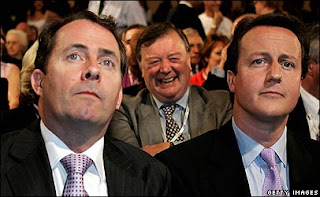 “Stop the Overstretch in the Armed Forces”, says the headline on the official Conservative website in that rather unappealing green they have taken to using. Dr Fox, Tory spokesman on defence, has been attacking the Labour government for overstretching and underfunding our forces.

So far so good, though he does not seem to have any concrete suggestions as to what the Conservatives might do about this state of affairs but then, it is hard to give definite undertakings or precise figures at this stage of the electoral cycle.

Dr Fox also has a go at NATO allies who do not pull their weight.

He also criticised other NATO governments for not pulling their weight in operations, and called for powers to suspend them if they fail to contribute as promised. Accusing Germany, Italy and Spain of "not fully playing their role" in bolstering Alliance forces in Afghanistan, he said: "We may require more troops but I don't see why that has to be British troops. We are more than shouldering our load."

That is the end of the piece on Conservatives.com and one has to go to the Yorkshire Post to find out what else did the bouncy little lad say.

"Where we have Nato operations taking place, the country that carries out any specific mission is the one that pays for it.

"When I was in Poland and Hungary in the last few weeks, I was complaining to them that they have come into Nato, pocketed the security guarantee and have cut the defence spending.

"We will seek, when we come to Government, to reach an agreement with our Nato partners to be able to suspend Nato members who do not spend the levels of funding that we agreed.

"It is not acceptable that British taxpayers and British armed forces should carry the burden of those who are members of Nato who want the collective security guarantee but are not going to pay for it."

This, dear readers, is known technically as tosh.

First of all, there is no such thing as an agreed level of funding in NATO. We have all seen Jaap De Hoop Scheffer, the SecGen of NATO travel round the capitals with a begging bowl in his hands to increase troop levels here or there, notably Afghanistan.

Secondly, the one country that did respond to the latest appeal for the aforementioned country was Poland, who also has troops in Iraq, as does Hungary. Does Dr Fox not know this? His hosts in those countries must have been superlatively polite not to point certain facts out.