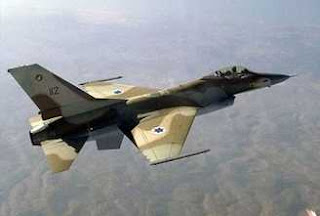 Yesterday, according to the great Sunday Times, Israel has drawn up secret plans to destroy Iran's uranium enrichment facilities with tactical nuclear weapons. Under the by-line of Uzi Mahnaimi in New York and Sarah Baxter in Washington, the newspaper further asserts that two Israeli air force squadrons are training to blow up an Iranian facility using low-yield nuclear "bunker-busters".

Nothing of this is new however. We have been reading reports of IAF practising a strike for some considerable time and, ten days short of a year ago, posted a picture of the IAF Squadron that would lead the raid. The IAF has also published a picture of one of what might be a back-up squadron (above left). And the idea of a nuclear strike on Iran goes back to at least October 2003 when the LA Times "revealed" planning for such an attack.

However, the Sunday Times, in that infuriatingly self-important way that so typifies the MSM, seems to think such plans are new. It is thus able to announce, "Revealed: Israel plans nuclear strike on Iran", telling us that they were prompted "in part" by the Israeli intelligence service Mossad's assessment that Iran is on the verge of producing enough enriched uranium to make nuclear weapons within two years.

Actually, this is also not new. Iran has been "on the verge" for some considerable time. But, as we pointed out in February last, it is producing a uranium bomb, which means it will be too heavy for its current or any known means of delivery in the foreseeable future.

This minor piece of information seems to have escaped the Sunday Times and nor have I seen it in any other MSM outlet. But it has an enormous significance in assessing the threat from Iran. Even if it could get a bomb together in two years, it would take several more before it could get anywhere close to developing a means of delivery that could carry the weight.

Another highly significant issue is the delivery to Iran by the Russians, which started last November, of the Tor-M1 air-defence missile systems. Time and time we have argued, not least here, that the presence of these highly capable missiles would tilt the balance of advantage against an Israeli airstrike, to the extent that, once deliveries are complete, it would no longer be an option.

This is something which the Sunday Times itself, when it was forecasting a raid by March 2006, thought important in December 2005 - but now seems to have forgotten about. It also seems to have forgotten about its earlier report in March 2005 that an Israeli strike had been given "initial authorisation", that too being announced in the same, breathless, self-important tones, the headline proclaiming: "Revealed: Israel plans strike on Iranian nuclear plant".

Once again, we have the same pair of journalists in the by-line, Uzi Mahnaimi - in Tel Aviv, not having yet moved to New York - and Sarah Baxter, in Washington. And, as for Mahnaimi, he is a very odd cove indeed.

Nevertheless, if an Israeli strike was likely then, as Mahnaimi then asserted, it is now - over a year later - highly unlikely, whether nuclear or otherwise. In the first instance, this is because it is evident that there is no immediate threat and, secondly, because the window of opportunity for a quick, pre-emptive strike is now closing, if not actually closed.

A grown-up newspaper might actually mention these issues, in the absence of which, you just know the story is a crock – one of these excitable, lightweight fillers that the Sunday Times uses when it wants to look important but actually does not have any hard news. The funny thing is that if this blog "revealed" such garbage stories in such a consistently breathless manner, we'd be laughed off the blogsophere.