They catch up … eventually 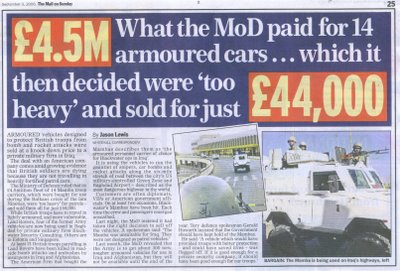 We did it on 3 July, barring a key bit of information that we had to tease out of the MoD through a Parliamentary question. This the Scotland on Sunday picked last week and we followed through last Friday.

Now, today – two months after we broke the original story - the Mail on Sunday has finally run it. Yet, at the end of the same month that we first ran it, little Shane Richmond, Telegraph web news editor, was happily pushing out an inane comment from Malcolm Gladwell, the author and New Yorker journalist, that blogs are "derivative".

Yet again this illustrates that sections of the MSM are so far up their own backsides that they haven't even begun to realise that, increasingly, blogs are running the agenda on certain issues. They are ahead of the curve.

As for the MoS, typically, it has gone for the cheap, sensationalist angle and has missed key parts of the story. That makes it just another space-filler rather than a contribution to the debate about the inadequacies of the MoD, which would have moved the issue forward. 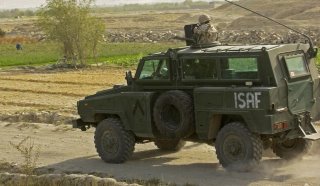 Not least, it parrots uncritically the MoD line that the Mambas were "too heavy", without stating why - and that they "were not designed as a patrol vehicle". Yet, that is precisely what they were designed for, a task - even as we write - at which, in the form of the RG-31, they are excelling in Canadian hands in Afghanistan.

It then mentions that, last month, the MoD "revealed" that the Army is to get 300 new, "tougher" armoured vehicles for use in Iraq and Afghanistan - failing, of course, to note that 100-plus of these are the useless Pinzgauer coffins on wheels. This, incidentally, is from Whitehall correspondent, Jason Lewis, who should have been aware of what was happening. When the butcher's bill comes in, you can bet the MSM will be waxing indignant but now, when there is an opportunity to do something and actually save lives - they are silent.

And, although all the information for the MoS piece came directly from the exertions of this blog – they even used the same photographs – was there any mention of EU Referendum? I'll give you three guesses.