Not on this planet 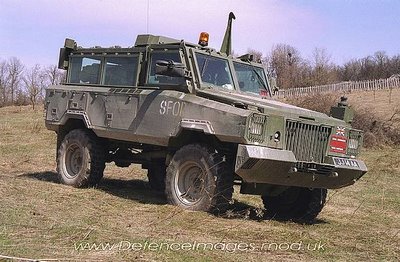 Regular readers will recall our campaign on "Snatch" Land Rovers and our calls for more better armoured vehicles, in particular the mine-protected RG-31 used by both US and Canadian forces.

During this campaign, it emerged that the MoD had already purchased a fleet of 14 RG-31 type vehicles - the precursor version called the Mamba (although they were also called the Alvis 4 and 8 series) – for use in Bosnia.

As a result, through MP Mike Hancock, questions were put in to find out what happened to these vehicles, knowing that some were actually in use in Iraq, being used to protect US diplomats travelling between Baghdad International Airport and the Green Zone.

The answers were picked up by Scotland on Sunday last week and make fascinating reading. It seems that all the vehicles in the fleet, which originally cost £4.5 million to buy, were sold abroad for the princely sum of just £44,000. Nine went to Estonia, four to "a US company" – which we know to be Blackwater Security Consulting - and one to a company based in Singapore. 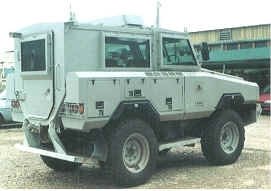 Even now, though, the MoD is still attempting to put their "spin" on the deal. It claims that the modifications of the Mambas left them "too heavy" to go on patrol. This, as we know, was the addition of underside armour to deal with the TMRP-6 mine threat, the armour having been developed specifically for the MoD by a South African technology company (see right).

But we also know, from an exchange of e-mails with some of the soldiers who operated the vehicles out in Bosnia that they remained perfectly serviceable with the additional armour. Latterly, we were told that the real reason for the claimed "maintenance problems" was that the UK supplier, Alvis, had withdrawn technical support for the model - for reasons we know not why.

The Scotland on Sunday paper remarks that while the financial loss to taxpayers is another embarrassment for the MoD, but adds, "far more serious is the suggestion it could have put the lives of British troops at even greater risk." 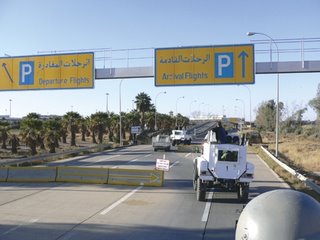 For sure, 14 vehicles would not have made much difference in Iraq, where over 200 "Snatch" Land Rovers are operating, but even they could have helped. At least one death, for instance, was attributed to a Land Rover ambush, where the vehicle was being used to ferry an officer from the British base to the airport – precisely the use to which the Mambas are currently being put by Blackwater Security Consulting. And, as we also know, Blackwater vehicles have survived at least two IED attacks (see picture below). 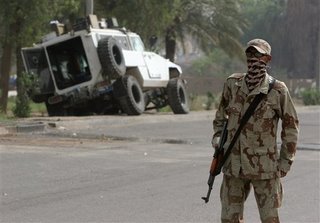 Tory defence spokesman Gerald Howarth insisted that the government should have kept hold of its Mambas when it had forces in such danger in Iraq and Afghanistan. He told Scotland on Sunday that, "To flog these vehicles so cheaply when there must have been a reasonable chance of them being usable in both Afghanistan and Iraq is unforgivable." He is absolutely right on this. As have Blackwater Security done, the additional armour could have been removed for the different theatres where there was no TMRP threat, and the vehicles would have been perfectly usable. 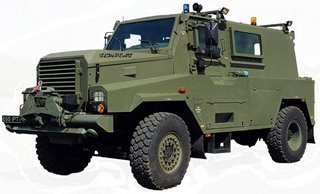 But, perhaps, an equal scandal is that the replacement vehicles – the Tempest MPVs, on which the US Cougar design is currently based, were not used in Iraq beyond the initial "war" phase of the invasion. The eight purchased have now been returned to the UK, pending despatch to Afghanistan.

It is decidedly ironic – if not tragic - that, having recognised the potential of these vehicles nearly four years before the US forces realised their value, the Army failed to exploit them. Only now, is the MoD buying a hundred to supplement the "Snatch" Land Rovers – with deliveries to start at the end of the year.

All of this, though, simply reinforces the wide-held and accurate view that, when it comes to understanding the equipment needs of our troops, and managing the procurement process efficiently, the MoD is simply not on this planet.