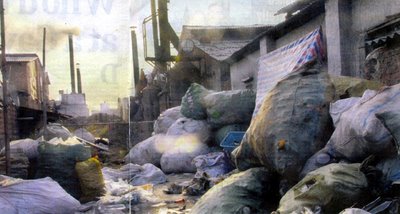 It is ironic that, the day Booker devoted the main story in his column to an analysis if how EU directives were turning our system of waste collection and disposal into chaos, the Mail on Sunday should have reported on one of the dire consequences of this chaos – and not mentioned the EU once.

The piece starts with a strap which declares, "The Green Gauleiters who force us to recycle out rubbish…". It goes on to refer to local authorities who "bully UK residents into complying with new 'green' laws", and then refers to "town hall officials" who argue that "local recycling schemes – which carry fines if they are not obeyed - are essential to avoid a Britain blighted by landfill sites".

There is no mention of the origin of these "green" laws, nor any mention of why the local authorities might be fined if they do not obey them, nor indeed any mention, when we have been served by landfill sites for decades, why we should suddenly consider ourselves blighted by them.

Nothing more typifies the crass inability of the MSM to get to grips with EU issues, matched only by the inability of either of the main opposition parties to do likewise – giving extra force to Booker’s concluding line of his piece: "Oh, for a properly clued-up media and an Opposition worthy of the name." As for the MoS, when we finally get a story, it is late and done badly. 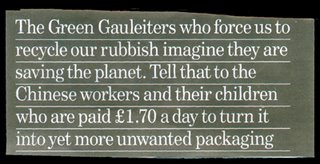 The MoS story is indeed dire – about the way supposedly recycled refuse is being transported to China, where it is processed in extremely poor hygienic conditions, with scant regard for the environment, causing massive pollution.

But even then, we reported on precisely this on 14 May this year, which was actually based in part on a story written up in the Guardian in September 2004. On the ball, the Mail on Sunday ain't.

But what the MoS could have done – and did not – was develop the story. That it did not is criminal. The horrific scenes that paper describes (see also picture) arise directly and as an inevitable consequence of the EU's obsession with creating regulatory-imposed targets for recycling, irrespective of the market capacity to absorb the material produced.

This is the classic producer-driven system against which all sane economists warn against, the very system that ensured the Soviet Union had massive surpluses of unwanted goods and never enough of the products in demand.

Essentially, with no market capacity to absorb the material in the UK, there is only one option – short of landfilling it, which is what is happening in some instances – and that is to export it to countries which are willing to deal with it. And that, currently, is China (as well as Indonesia). 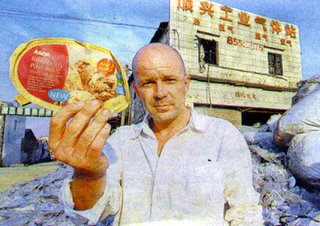 The MoS cites Greenpeace spokesman Edward Chan, calling on "British consumers" to put pressure on recyclers to make sure their waste goes where it can be managed without causing damage, but again that ignores the economics.

Firstly, the massive glut of recycled material drives the price down. In a competitive market, only those who process the material most cheaply can hope to make a profit. It is there that Chinese processors, paying workers a mere £1.70 a day and operating under primitive standards, are able to compete.

Secondly, recycled materials are competing against cheap raw materials and there is a limit to the prices the market will bear. If the cost of processing does increase, as result of increased wages and better hygiene and environmental standards, the material will be priced out of the market.

What this actually boils down to is that, under the current situation, it is not possible at all to process economically much of the material produced. It is only by cutting corners and using cheap labour that there is any demand for it at all.

On the other hand, there is no scope for increasing charges at the other end, where the waste is actually generated. The cost of separate collections, sorting and primary processing is already – as Booker reminds us – set to add £10 billion a year to the cost of the waste system. That, in the context of increased and highly unpopular Council Tax bills, is already politically unsustainable.

Booker, in his column, focuses on the experiences of Christina Speight, one of our most valuable forum members, who has confronted her council in Ealing about its mad scheme to issue residents with lidded plastic containers for "food waste". This was accompanied by a glossy leaflet illustrating the food waste allegedly thrown away by the average household each week, 8.5 kilograms (18 lbs) of it, including a mass of apparently untouched fruit and veg, bread, cream, milk and heaven knows what. "Our own household," says Mrs Speight, "throws away barely a tenth of that."

Christina discovered that the council had bought 95,000 of these containers from a firm in Italy, costing between £5 and £10 each, so that, in the name of saving the environment, whole truckloads had been brought half way across Europe. In recent days, Booker adds:

…our media (not least the correspondence columns) have been full of items on the chaos that now prevails in the collection and disposal of waste in Britain. They ranged from the 500,000 wheelie bins fitted with microchips (to measure how full they are) to householders so frustrated by new collection times and the mass of different containers into which they must sort their rubbish that a fifth of all Britain's 40,000 dustmen claim that in the past year they have been assaulted, many now saying they want to give up.

Further chaos results from a thicket of new rules governing what householders can or cannot dump at council tips. Some are now being asked by councils to pay for a permit allowing them to deposit waste at all. Rules making it more costly to get rid of old vehicles saw the number of "illegal disposals" last year soaring to 1.5 million.

With such a plethora of new laws making it ever harder to dispose of waste is it really surprising, many people ask, that Britain is seeing "an epidemic of fly-tipping"?

What is not explained, he goes on to say,

…is just why we are faced with this chaos. The answer is that the revolution in how we dispose of our rubbish has been imposed on us by a series of Brussels directives, the purpose of which is to phase out the burying of waste in landfill and to switch our efforts to recycling, while incinerating everything that cannot be recycled.

That is the eurosceptics’ main problem. Contrary to what our critics often complain, we do not oppose the European Union simply because of what it is, but also because what it does is inevitably a disaster. But, if the disasters it creates are not identified and publicised by the media – which seems more concerned to feed off a diet of never-ending "Euromyths", many of them which are imaginary – the public at large will never get to share the sentiment that we are "better off out".

When, on the other hand, still respected (by a majority) organs like the BBC puff up the non-existent achievements of the EU, the distortions magnify and the pressure for change is suppressed.

That the subject is so mundane and unglamorous as refuse, therefore, is not the point. What matters is that a previously efficent system that affects everyone is being turned into chaos at enormous cost – both to us and to those in China who suffer the consequences – and the media cannot be bothered to tell us the reason for it.