The Poles have a government (for the time being) 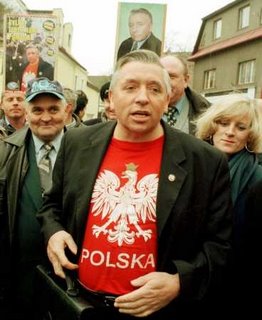 One of the fascinating aspects of the political situation in Poland (if that is not too strong an expression) has been the absence of a government since September. There has been a Prime Minister, Kazimierz Marcinkiewicz, and a Defence Minister, Radek Sikorski, who is given to many pronouncements, including suggestions of a “better” constitution for Europe.

This happy state of affairs (the absence of government not Mr Sikorski’s pronouncements) has come to an end temporarily with the leading party, Law and Justice, signing a coalition agreement with Andrzej Lepper’s Self-Defence Party and the Catholic League of Polish Families.

The latter two parties are usually described as being eurosceptic and anti-reform and Mr Lepper’s appointment as Deputy Prime Minister in charge of agriculture is “causing concern in Brussels”.

Much more to the point, it is causing concern in Poland. For one thing, the new government is still 13 seats short of a parliamentary majority, which means that it is likely to collapse within a few months. For another, something like 70 per cent of the country’s population oppose the formation of the coalition.

The boorish, thuggish, backward looking, anti-semitic Mr Lepper is one of the reasons why Poland reluctantly voted for membership of the European Union.

Politics in Eastern Europe divides along faultlines that are different from those in Western Europe. The question that faces the electorate, whether overtly or covertly, is whether the country is to become part of the modern world, look outwards, take its rightful position as a European nation. The other side of the debate is obscurantism, nasty, often anti-semitic nationalism, economic backwardness and a feared exclusion from the developed world.

It is unfortunate from the point of view of the eurosceptic cause that in most of the post-Communist countries the opposition to EU membership was propounded either by unreconstructed communists or virulent nationalists, both members of the latter political group.

In the end, the referendums were all won but the turn-out was low in most countries, the sort of result you would expect in the circumstances.

Now, terrifyingly for the Poles, one of those politicians has acquired a high position in the government, though probably not for long. The most likely outcome of that will be that the Poles who have had growing doubts about the EU will cling to it for dear life as they perceive rule by the likes of Andrzej Lepper to be the alternative.

In the meantime, Radek Sikorski, who, one assumes, will remain Defence Minister, has been complaining with some justification that once again Poland is being disregarded by Russia and Germany in their agreements.

Speaking at a conference in Brussels Mr Sikorski attacked the planned gas pipeline between Russia and Poland that will allow Russia to cut off energy supplies to Belarus and, by implication, Poland without hurting Western Europe.

“The $5bn (£2.7bn) pipeline, agreed in September 2005, will connect Babayevo in Russia to Greifswald in Germany.

The 1,200km (744 mile) pipeline is now under construction and will deliver Russian gas to Germany - and eventually to other Western European nations - by 2010.”

Naturally enough, in that case, the West European countries would not go to the assistance of the East Europeans who might be losing out.

The threat to Belarus must be there in case there is a change in government. As Aleksander Lukashenka is President Putin’s closest ally and supporter, there seems no particular reason for cutting off their gas.

Poland is another matter, of course. Defence Minister Sikorski became quite heated in his analysis and compared the building of the pipeline to the infamous Molotov-Ribbentrop Pact of 1939, whose secret clauses gave Stalin the Baltic States and divided Poland between Germany and the Soviet Union.

This sort of behaviour, said Mr Sikorski (no relation to the general), called into question the whole concept of a common foreign policy. Well, yes, one could put it that way. One assumes the Defence Minister was ironic but with politicians you can never tell.