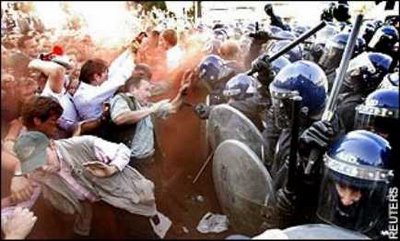 Flashback: 15 September 2004: A demonstration against the fox hunting Bill, outside Parliament:

Instantly, the police responded with a flail of truncheons. For a moment, they resembled beaters driving birds towards guns. They were scenes more associated with the clash of police and shaven-headed football hooligans or dreadlocked anti-capitalist demonstrators rather than men in flat caps and women in quilted waistcoats. 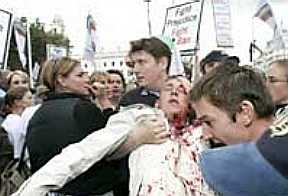 In a flurry of violence, people were hurt by the impact of truncheons and by the crush of people pushing forward to join the pre-planned sitdown. Archie Norman, the Conservative MP, who had come out to watch the mayhem, was almost hit by a bottle that smashed beside him. Mr Jukes condemned the behaviour of the police officers. "I can't believe it happened - there was no reason for it at all," he said.

"There was a bit of a surge and they only needed to say, 'Steady on lads', but instead they started hitting everyone. "I even saw old men with their heads split open. "There were all these young policemen having fun with their truncheons, waving them over their heads before flashing them down on ours." One of the older protesters injured in the melee was Simon Harrap, the Master of the Hampshire, who said: "It was incredibly heavy-handed." 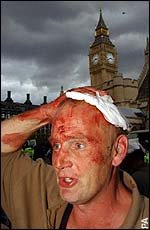 "We're decent, respectable people and we don't deserve the riot squad treatment," David Jukes, 45, the Master of the Zetland Hunt in North Yorkshire, said as he mopped a bloodied brow.

Standing beneath the stern gaze of the statue of Oliver Cromwell, William Hudson, 27, from Hampshire, had blood from a head wound all over his green T-shirt.

"I saw them hitting the person behind me, they did not seem concerned whether people were trying to go forward or back, everyone was getting crushed, it was very frightening. There is no point hitting people on the head. Why could they not hit our bodies?" 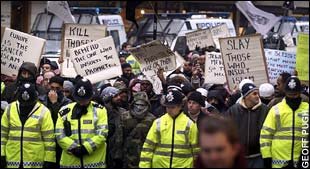 An Association of Chief Police Officers spokesman said that the protests did not yet represent a serious threat to public order. A Scotland Yard spokesman said: "Arrests, if necessary, will be made at the most appropriate time. This should not be taken as a sign of lack of action."

Scotland Yard says a decision not to arrest protesters was taken because of public order fears. It confirmed that police had received more than 100 complaints from the public about the protesters' behaviour.

Yesterday, more than 1,000 demonstrators staged a second protest outside the embassy. The only arrests made were of two men found carrying cartoons of Mohammed. Police said they had been detained "to prevent a breach of the peace". A man dressed as a suicide bomber, however, was left unhindered, while the police sought to prevent photographers taking pictures.