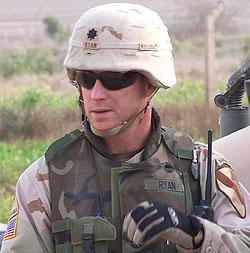 Although it was published in January of this year, it has a timeless quality about it, offering a message under the title "Media's coverage has distorted world's view of Iraqi reality" that is increasingly relevant to a wide range of issues. He starts:

All right, I've had enough. I am tired of reading distorted and grossly exaggerated stories from major news organizations about the "failures" in the war in Iraq. "The most trusted name in news" and a long list of others continue to misrepresent the scale of events in Iraq. Print and video journalists are covering only a fraction of the events in Iraq and, more often than not, the events they cover are only negative.

The inaccurate picture they paint has distorted the world view of the daily realities in Iraq. The result is a further erosion of international support for the United States' efforts there, and a strengthening of the insurgents' resolve and recruiting efforts while weakening our own. Through their incomplete, uninformed and unbalanced reporting, many members of the media covering the war in Iraq are aiding and abetting the enemy.

The fact is the Coalition is making steady progress in Iraq, but not without ups and downs. So why is it that no matter what events unfold, good or bad, the media highlights mostly the negative aspects of the event? The journalistic adage, "If it bleeds, it leads," still applies in Iraq, but why only when it's American blood?

In a tightly-framed article, with better writing than most journalists can produce, he goes on to explain how the operation in Fallujah "delivered an absolutely devastating blow to the insurgency", an operation that "arguably could equate to the Allies' breakout from the hedgerows in France during World War II."

"Put one in the win column for the good guys, right?" he comments, adding wryly, "Wrong. As soon as there was nothing negative to report about Fallujah, the media shifted its focus to other parts of the country." That and much more analysis leads to this damning indictment of the media:

The key to the enemy's success is use of his limited assets to gain the greatest influence over the masses. The media serves as the glass through which a relatively small event can be magnified to international proportions, and the enemy is exploiting this with incredible ease. There is no good news to counteract the bad, so the enemy scores a victory almost every day. In its zeal to get to the hot spots and report the latest bombing, the media is missing the reality of a greater good going on in Iraq. We seldom are seen doing anything right or positive in the news. People believe what they see, and what people of the world see almost on a daily basis is negative. How could they see it any other way? These images and stories, out of scale and context to the greater good going on over here, are just the sort of thing the terrorists are looking for. This focus on the enemy's successes strengthens his resolve and aids and abets his cause. It's the American image abroad that suffers in the end.

Ryan concludes: "I am confident that history will prove our cause right in this war, but by the time that happens, the world might be so steeped in the gloom of ignorance we won't recognize victory when we achieve it," then adding a postcript, which is most damning of all:

I have had my staff aggressively pursue media coverage for all sorts of events that tell the other side of the story only to have them turned down or ignored by the press in Baghdad. Strangely, I found it much easier to lure the Arab media to a "non-lethal" event than the western outlets. Open a renovated school or a youth center and I could always count on Al-Iraqia or even Al-Jazeera to show up, but no western media ever showed up – ever.

In his own way, Ryan is telling us that the media is not playing a zero-sum game. The fourth estate is an essential part of civilised life, and a fundamental part of democracy. Like it or not it shapes opinion and, when it does not report, or miss-reports event, it distorts opinion.

Recognisably, it is doing both in Iraq but, as we have observed, it is doing the same thing with the Conservative Party leadership, with New Orleans and Katrina, and innumerable other issues – not least the European Union. We have said it before, but it is still worth repeating it: the media now is no longer part of the solution – it is part of the problem.