In the lap of luxury 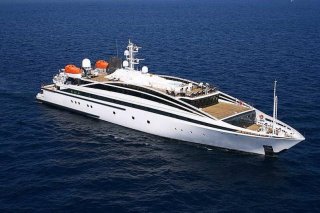 "With her dynamic and futuristic profile and interiors, RM Elegant will be taking her rightful place among elite of the world's motor yachts.

This yacht is sure to set the standard for style and opulence in the new century. She is being created for those who appreciate truly luxurious living, and are ready for sheer joy of life aboard a design masterpiece. From the moment you step aboard, the highly trained crew of 32 will be ready to anticipate your needs and provide an outstanding level of services."

So opens the charter company’s website and, just in case you are tempted, the daily hire rate is a mere €65,000 a day.

As they gawp at this impressive piece of hardware, berthed at Athens’s Flisvos Marina when it is not out on charter, European taxpayers may not know that this ultra-modern 237.53ft (72.40m) Elegant was built by in 2005 by Lamda Shipyard, a firm that specialises in building and refitting luxury yachts for passing billionaires.

But what will particularly impress them is that they, as European taxpayers, have just contributed €10.349.269 to the shipyard, by way of an EU grant awarded by the commission under its "Shipbuilding Framework for regional aid" programme.

This munificence was approved by commissioner Mario Monti on 22 September 2004, case reference N 617 /2003, for "modernising and upgrading the yard's facilities".

Payment was only authorised, according to commission documentation, after meetings with representatives of Lamda Shipyard on 28 June 2004, and information supplied by the Greek government on 7 July 2004 and further "clarification" submitted after that date (unspecified).

Astute readers might also suspect that "Lamda" is not an entirely unfamiliar firm, and they would be right. Lamda Shipyard is a subsidiary of Lamda Development which is – yes, you've guessed it – one of the Latsis group of companies, in which Dr Spiros Latsis, the Greek multi-billionaire has major financial interests.

Looking at the key dates of this generous commission grant, the application was made on 5 December 2003 but it seems to have run into slight complications, which may be the reason why there was a meeting between representatives of Lamda Shipyard and the commission on 28 June 2004 and then further correspondence with the Greek government which continued until after July 2004, with the final approval being given in the September.

Our astute readers will quickly realise that, between the application being made and approved, one José Manuel Durao Barroso, then commission president designate, and his wife enjoyed a lavish free holiday on Dr Latsis's own private luxury yacht.

Yet, when the news broke that Barroso had enjoyed this hospitality, his chief spokesman, Françoise le Bail, declared that as far as she knew, his host had no "business ties with the EU".

But, apart from everything else, it now appears that a Latsis company was awaiting a decision from the commission about the payment of a €10 million grant, which was not approved until after Barroso had enjoyed his holiday.

This is, of course, a complete coincidence and in no way indicates that Barroso should have declared a potential conflict of interest. In any case, I am sure that European taxpayers totally approve of their money being paid to a shipyard which enables hard-working billionaires to be kept in the lap of luxury.